As of May 11, Canadians contributed $60 million to the Red Cross to help the victims of the wildfire in Fort McMurray. The Government of Canada will match individual donations to the Red Cross up to May 31.

A disaster like the wildfire in Alberta brings people together. I heard of one man who gave out bottles of water to motorists who were waiting in line to buy gasoline. People shared gasoline with one another so that they could escape the fire. People have opened their homes to strangers.

Disasters change the way we interact with one another. They break down the boundaries that normally keep us separate.

Society is a network of boundaries—who’s in and who’s out, who’s up and who’s down, who’s rich and who’s poor, who you talk to and who you don’t talk to. Disasters sweep away all those boundaries and we relate to each other simply as fellow humans who are vulnerable.

Disasters change the way we interact with one another. They break down the boundaries that normally keep us separate.

The Spirit sweeps away boundaries: “Now there were devout Jews from every nation under heaven living in Jerusalem. And at this sound the crowd gathered and was bewildered, because each one heard them speaking in his own language…about God’s deeds of power” (Acts 2.5-6, 11).

That’s what the Spirit does. The Spirit overcomes tribalism.

The tribe gives us a sense of belonging and a sense of security. Most important of all, the tribe gives us an identity. These are all good things. But the tribe also divides people into “people like us” and “people not like us.” The tribe teaches us that we are different. The tribe can teach us to fear people of other tribes. At its worst, the tribe can provoke discrimination and violence towards people of other tribes.

The Cold War is history, but tribalism has not gone away. In 1996, Samuel Huntington published a book entitled The Clash of Civilizations and the Remaking of World Order. His thesis was that the world had entered a new age: the divisions in our world are no longer based on ideology but on race and religion.

The Good News is that the Spirit is at work in the world to overcome tribalism.

Racism still exists in Canada, but our culture is changing. When I was a kid, native people were portrayed in movies and television programs as savages. That no longer happens. Racist jokes and racist terms in our language are no longer acceptable.

The Spirit is promoting a growing sensitivity to the dignity of the human person. We recognize that there are human rights and that these rights are non-negotiable. Throughout the Western world various governments have enshrined basic human rights in law. Discrimination on the basis of race, religion, or gender is no longer acceptable. We have come a long way in a relatively short time.

I grew up at a time when Catholics and Protestants didn’t trust each other. But then came the Second Vatican Council, which encouraged Catholics to adopt a new attitude towards our sister and brother Christians of all denominations. A new spirit breathes among Christians. Whereas at one time we attacked each other, we are now making efforts to understand and to appreciate each other’s gifts. Dialogue has replaced debate. Cooperation has replaced competition. 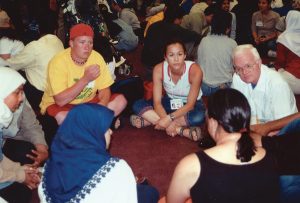 Fr. Dave Warren at a World Youth Day 2002 (Toronto) event initiated by the Toronto Muslim community and co-sponsored by Scarboro Missions Interfaith Department. The event brought together 200 Muslim and 200 Catholic youth for an evening of dialogue.

The Spirit is bringing the Churches together. The Spirit is also bringing together people of different faiths. The Second Vatican Council encouraged Catholics to adopt a new attitude towards the Jewish people, towards Hindus, Buddhists, and towards Muslims. The Second Vatican Council taught us to see what is positive in other religions and to learn from them. In 1990 Pope John Paul II wrote, “The Spirit’s presence and activity affect not only individuals but also society and history, peoples, cultures, and religions.” (Redemptoris Missio, 28)

The Roman Catholic Church is actively engaged in conversation with people of other faiths. This conversation takes place at all levels of the Church. Scarboro Missions has been involved in interreligious dialogue for the past 30 years. It has been my privilege to be in conversation with Muslims. I was honoured to be invited to a recent banquet hosted by the Canadian Council of Imams.

The wildfire in Alberta has temporarily broken down the boundaries that normally keep us separate. We rejoice in the rediscovery of our common humanity. But we know that, once disaster passes, life returns to normal.

The wild fire of the Spirit will not allow us to go back to life as normal. The Spirit continues to break down the boundaries that divide us. Pentecost is not a past event.