The Scarboro Missions Golden Rule poster is now on permanent display at the United Nations headquarters in New York City. On January 4, 2004, Mrs. Gillian Sorensen (pictured here), Assistant Secretary-General of the UN, accepted the poster as a gift from the North American Interfaith Network.

The presentation was part of an interfaith ceremony in which it was pointed out that the Golden Rule is not just a moral ideal for relationships between people, but also for relationships among nations, cultures and religions.

In presenting the poster to the Assistant Secretary-General, the following a statement was read by a representative of the North American Interfaith Network (NAIN).

The framed Golden Rules poster was presented to Mrs. Gillian Sorensen, Assistant Secretary-General of the United Nations on January 4, 2002. It was presented by the Board of the North American Interfaith Network (which has sixty-five member organizations) and Scarboro Missions, on behalf of the people in the many religious, spiritual and humanistic communities who honour these Golden Rules. In presenting the poster, the following statement was read:

The Statement — Golden Rule for a Culture of Peace

Because the United Nations is a home for our highest human ideals, and because the world’s religions have a duty to articulate and promote those ideals, we are honoured to present you with “The Golden Rule.” In this poster, thirteen religious and spiritual traditions state a universal principle in elegant and distinctive forms.

These Golden Rules are evidence of a Global Ethic that transcends nations, civilizations, and religions. Yet no other statements so clearly summarize the simple practices of kindness and sustainable human conduct. In recent years, gatherings of religious and spiritual leaders have confirmed that “this ancient precept is found and has persisted in many religious and ethical traditions of humankind for thousands of years. . . [and] should be the irrevocable, unconditional norm for all areas of life, for families and communities, for races, nations, and religions” (Toward a Global Ethic).

The United Nations provides a unique forum where the subtleties of this universal principle can be translated into the realm of international affairs. We are inspired by key United Nations documents such as the Universal Declaration of Human Rights and its premise that those rights we wish for ourselves shall be granted to others as well. Equally challenging is the principle that no nation will find peace until it wants for others the same peace and security it seeks for itself.

We believe that these Golden Rules, also known as the “law of reciprocity,” must be obeyed by all nations, and that, in the interests of global security, no nations or leaders may exempt themselves. Whatever is hateful or injurious to ourselves, we must not do to others.

Failure to adhere to these moral principles brings great hazards to all, ranging from unsustainable development practices to environmental crises and nuclear threats with their inherent potential for catastrophe. Nations must treat other nations as they wish to be treated. 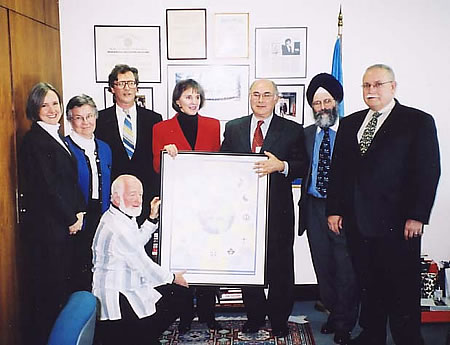 Together, these precepts remind us that our diversity can flourish within a greater and simpler unity – the human family, with its common origins, needs, and aspirations. The Golden Rules teach that no one – no nation, culture, or religion – is an island unto itself. Drawing on time-tested wisdom and experience, they presume our interdependence and declare our personal responsibility for the common good.

Presenting a framed Golden Rule Poster to the Secretariat of the United Nations on January 4, 2002 were leaders from the North American Interfaith Network (NAIN) and some of its member organizations and friends: Rev. Deborah Moldow from United Religions Initiative at the UN and World Peace Prayer Society; Sister Joan Kirby, Representative to the UN from Temple of Understanding; Father Terrence Gallagher, from Scarboro Missions in Toronto; Joel Beversluis, Editor of the NAIN newsletter and CoNexus Multifaith Media; Mrs. Gillian Sorensen, Assistant Secretary-General of the United Nations for External Affairs; Jonathan Granoff, from Temple of Understanding, Bawa Muhaiyadeen Fellowship, and Global Security Institute; Ralph Singh, Secretary of the NAIN Board, from Gobind Sadan-USA; and Dr. Elias Mallon, a founder of NAIN and Dean of Auburn Seminary.