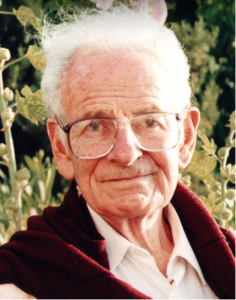 An “oasis of peace”—for many religious Jews, Christians and Muslims, that is what they believe the Holy Land is meant to be, and what they hope and pray it will ultimately become some day. For the late Father Bruno Hussar, however, that was more than simply a dream: it was something he dedicated much of his life to building, and it is an important part of his legacy.

Born in Cairo (Egypt) on May 5, 1911, André Hussar (his birth name) grew up in a non-practising Jewish household, with a French mother and a Hungarian father. After high school, he went to Paris, to pursue university studies in engineering. It was during his university years that he began to feel strongly attracted to Christianity, and eventually converted to the Christian faith, being baptized in 1935. Of his earlier engineering studies, he would later remark that “All I remember from those years was learning how to build bridges”—physical bridges, certainly, but also, bridges of understanding and dialogue between cultures and religions. As a convert from Judaism, he experienced very deeply and personally the anti-Semitism of Europe in the the 1930s and 40s, and especially the events of the Holocaust; he also became friends with the French philosopher Jacques Maritain and his wife Raïssa, who were early leaders in the movement to change Christian attitudes towards Judaism. After the war, he pursued studies in philosophy, and, when he was ordained a priest of the Dominican order on July 16, 1950, he chose Bruno as his religious name.

His religious superior, Father Albert-Marie Avril—conscious of Bruno’s desire to help heal some of the negative history of Christian behaviour toward Jews, and of his sense of solidarity with the young State of Israel—sent him to Jerusalem, to help set up a Christian centre for Jewish studies there that would be comparable to the Dominicans’ Islamic study centre in Cairo. Following his arrival in Haifa in 1953, he undertook studies in an Israeli ulpan (an intensive immersion programme in the Hebrew language), and became part of a small group of French Catholics (generally members of religious orders) who came to Israel between the late 1940s and the mid-1960s, who were exploring an appropriate way for Christians to be present in—and in dialogue with—Israel’s predominantly Jewish population … a Christian community that would have Hebrew as its day-to-day language, and could appropriately incorporate aspects of Christianity’s Jewish heritage. In this, they were supported by several high-level Catholic officials, including Cardinal Eugène Tisserant, a prominent figure in the Vatican. In February 1955, he was one of the co-founders of the St. James Association, a small community of Jews who had converted to Catholicism, whose stated mission was “to fight against anti-Semitism in all its forms” and “to foster mutual understanding, sympathy and friendly relations between the Catholic world and Israel”.

With Cardinal Tisserant’s support, he obtained Vatican permission in 1956 for this small community to begin using Hebrew for certain parts of the Mass (until 1967, this community was centred at the convent of the Sisters of Sion in Ein Kerem, and gradually grew to include several hundred members, and four centres, in Jerusalem, Jaffa, Tel Aviv and Beersheva; it continues today, in a much more extensive form, as the St. James Vicariate for Hebrew-speaking Catholics). Hussar also served as a chaplain to the Arab Catholic community in Jaffa, and these experiences gave him a keen sense of the complexities of contemporary Israeli life, and inspired him to seek out ways for Jews, Christians and Muslims, Israelis and Palestinians, to live together in harmony. He once said: “I feel I have four selves. really am a Christian and a priest, I really am a Jew, I really am an Israeli and if I don’t feel I really am an Egyptian, I do at least feel very close to the Arabs whom I know and love.” In 1959, he founded (together with his brother Dominicans Jacques Fontaine and Marcel Dubois) the St. Isaiah House in Jerusalem, intended to promote Jewish-Christian friendship and prayer. A theological consultant during the Second Vatican Council, Hussar played an important and active role in the writing and development of the Council’s document “On the Jews” (which would eventually become the 1965 declaration Nostra Aetate). In 1966, he became an Israeli citizen.

Hussar’s ultimate dream had been to establish a kibbutz where Jews, Christians and Muslims would model peaceful co-existence and friendship. In November of 1970, he signed a lease for a piece of property, midway between Jerusalem and Tel Aviv, that would be “an oasis of peace” (a phrase taken from Isaiah 32:18)—in Hebrew, Neve Shalom, and in Arabic, Wahat as-Salaam (today, often referred to by both these names, or simple as NSWAS). Here, Israeli Jews and Arabs (both Muslim and Christian) could live together as a concrete sign of hope for the Middle East. It was to be a community of mutual respect and equality, but its beginnings were very difficult (in the beginning, Hussar himself lived on the site in a bus!). In 1978, five families (one Palestinian family and four Israeli families) set up a tent commune on the site, in very modest surroundings; today there are approximately sixty families who make up the community, divided evenly between Israelis and Palestinians (both Muslims and Christians), and there is a waiting list of people who wish to move there. NSWAS has been recognized by numerous international awards for its work and, although the kibbutz has experienced many ups and downs, its bi-cultural, bilingual education system is viewed by many as an important example of a creative, constructive approach to Israeli-Palestinian tensions. For his efforts, Bruno Hussar was twice nominated for the Nobel Peace Prize.

Father Bruno Hussar, a visionary Catholic and extraordinary interreligious and intercultural bridge-builder, died in Jerusalem on February 8, 1996, and is buried on the grounds of Doumia (“place of silence”), a small sanctuary of prayer he established on the property of NSWAS.

Maria Chiara Rioli, “A Christian Look at the Israeli-Palestinian Conflict. Bruno Hussar and the Foundation of ‘Neve Shalom/Wahat Al-Salam’”; online at: http://www.quest-cdecjournal.it/focus.php?id=327