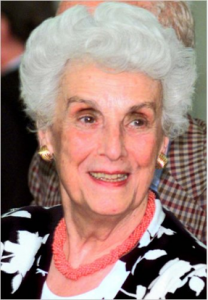 Journalists often have the opportunity for rare, up-close vantage-points on key historical events; they are fre­quently eyewitnesses to history. For the Italian journalist, Jewish community leader and interfaith pioneer Tullia Zevi, her life coincided with the blossoming of Jewish-Christian relations, and she was one of its protagonists and leading voices.

Born in Milan on February, 2, 1919, Tullia Calabi went on to study music at Milan’s Conservatory, and philosophy at the University of Milan. When, in September 1938, the Italian government passed a series of “race laws,” she and her family were vacationing in Switzer­land, and her father (a prominent lawyer and anti-Fascist activist) announced that they would not be able to return to Italy. The family moved to France, where Tullia continued her university studies at the Sorbonne, and they eventually moved to the United States when France entered the Second World War (what she jokingly called her “American exile”); she continued her music studies at the Juilliard School in New York, and at Radcliff College in Massachusetts, working as a harpist to earn money. It was in New York that she began a long and distinguished career as a journalist, and it was there that she met her husband, Bruno Zevi, an architect, histo­rian and art critic (they married in 1940) After the war, she returned to Italy in 1946, to help re-build the shattered Italian Jewish community, and she was sent to cover the Nuremberg Trials and the trial of Adolf Eichmann, one of the few women to do so.

From 1960 to 1993, Tullia was a correspondent for the Israeli newspaper Maariv, and she was a regular contributor to the British weekly newspaper The Jewish Chronicle and the Religion News Service, gaining an international reputation for the calibre of her report­ing. In 1978, she was elected as Vice-President of Italy’s Union of Jewish Communities (UCEI) and, in 1983, she became its President—the first woman ever to do so. During her five years in that position, she welcomed Pope John Paul II to the Tempio Maggiore (Rome’s main synagogue) for his historic visit in April of 1986.

One of the most prominent women in postwar Italian life, she was actively involved in politics, both in Italy and overseas, and counted many prominent politicians and cultural figures among her close personal friends. She spoke out eloquently and often against all forms of racism and discrimination, and in favour of human rights and an inclusive society. As she once wrote, “The seeds of intoler­ance are always lying in wait. Democracy is constructed so that we can be on the lookout for totalitarian regimes. But the danger is always there. A great American, Thomas Jefferson, said that the price of liberty is eternal vigilance and I believe that this should be our message to today’s young people.”

Tullia Zevi was a leading figure in national and international Jewish affairs, holding senior positions in Italian and global Jewish organi­zations. She was also an ardent advocate of dialogue between Jews and Christians, chosen in 1998 as President of the Commis­sion for Intercultural and Interfaith Relations of the European Jewish Congress. Her commitment to interreligious dialogue did not, however, prevent her from speaking critically at times, especially when she felt the Catholic Church was acting inappropriately in its relationship with the Jewish community. In terms of her interfaith engagement, she once said: “The issue is to reach the conscience of the faithful, an effort which is underway. These things take time. We are a patient people, and the Church is a patient institution. We move in slow times. The issue is to move in the right direction.”

Tullia was a much-loved figure in Rome’s Jewish community and, in her later years, was the recipient of numerous awards and cita­tions for her interreligious and political leadership, including Italy’s highest civilian honour, the Cavaliere di Grande Croce, which she was awarded in 1992, a year when she was also Italy’s nominee for the European Woman of the Year award. In 1994, the Italian Minister of Culture conferred its Gold Medal upon her for her work in the fields of education, culture and the arts. She served as a consultant to several Italian government ministries, and to UNESCO.

In 2007, Tullia published her autobiography, called Let Me Tell You My History: A Dialogue About Judaism Between a Grandmother and Her Grandchildren (in Italian: Ti racconto la mia storia: dialogo tra nonna e nipote sull’ebraismo), which was welcomed by many reli­gious and political leaders. On January 22, 2011, Tullia Zevi died at the age of 91, mourned by so many who had admired her leader­ship, strength and conviction. Rome’s former mayor, Walter Veltroni, called her “an extraordinary woman who was at once strong, courageous and meek,” and the World Jewish Congress’s Elan Steinberg spoke of her as “a clarion voice that warned against the dangers of neo-Nazism, not just to Jews, but to society and democracy as a whole”. Pope Benedict XVI sent a condolence telegram of his own, in which he “[recalled] her exalted moral profile and authoritative contribution to the development of values of democracy, peace and freedom in Italian society, and to sincere and profound dialogue between Jews and Christians”. Today, a Roman school, the Istituto comprensivo Tullia Zevi, bears her name and continues her legacy.