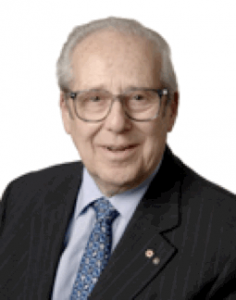 It isn’t everyone who can rightfully title their autobiography “Building Bridges”. But, in the case of Dr. Victor Goldbloom, bridge-building—whether religious, cultural or linguistic—is what defined his life’s work, as a physician, a public figure, and a leader in the field of interreligious dialogue.

A native of Montréal, Victor Goldbloom was born on July 31, 1923. Following in the footsteps of his father Alton (a noted Montréal pediatrician), Victor pursued his medical studies and graduated as a pediatrician in 1945. He married Sheila (Barshay-Rothstein) in 1948, and went on to teach pediatric medicine for several years. His passion for social issues, however, led him to enter public life in the midst of the 1960s, and he was elected to the Québec National Assembly in 1966, as the député [member] for the riding of Darcy-McGee. In 1970, having won the election, Québec Premier Robert Bourassa named Goldbloom to the provincial cabinet, making him the first Jew in Québec’s history to hold such a high-level political appointment. Dr. Goldbloom served four terms in the National Assembly (including terms as Minister of the Environment and Minister of Municipal Affairs), until October 1979, when he resigned his legislative position.

After stepping down from political life, Goldbloom shifted his energies to the field of interreligious dialogue, serving as the chair of the Canadian Council of Christians and Jews from 1980 to 1987 and, from 1982 to 1990, as President of the International Council of Christians and Jews (ICCJ). In 1990, he was named as one of the Jewish representatives on the national Jewish-Christian dialogue (Canadian Christian-Jewish Consultation), which he later chaired, and he has been for many leaders a leading figure in the Christian-Jewish Dialogue of Montréal. In 1984, Goldbloom led an ICCJ delegation that met with Pope John Paul II, and he spoke eloquently about the tensions in the Middle East, and his hopes for a resolution of the longstanding Israeli-Palestinian question:

Our concern for peace extends throughout the world; it has a particular locus in the Middle East. We must mourn every life that has been lost. Christian or Jewish or Muslim; and we pray that the State of Israel and its neighbours may come to live in security, in recognition, and in fruitful rather than hostile relations. We invoke your leadership toward these ends.

Goldbloom was chosen in 1991 to serve as the federal Commissioner for Official Languages, a role in which he was called on to uphold Canada’s nature as an official bilingual country; he was widely recognized as a passionate, articulate and thoughtful advocate for Canada’s linguistic and cultural diversity, and held that position until 1999. He was inducted into the Order of Canada in 1983, and became a Companion of the Order in the year 2000.

In 2008, the Bouchard-Taylor Commission released its report, recommending ways to appropriately accommodate religious diversity in Québec’s public life. While Goldbloom supported many of its findings, he also argued that its restrictions on the wearing of religious symbols by government employees were an unnecessary infringement on personal religious freedom, and could make it difficult or impossible for certain religious groups (such as Orthodox Jews) to work comfortably in the public service.  When the Québec government proposed a restrictive “Charter of Québec Values in 2013, Goldbloom was a prominent spokesperson in favour of a broad, inclusive vision of Québec identity, and spearheaded a video campaign called “Je suis Québécois” [I am a Quebecker) which featured a wide range of individuals of different races, religious and backgrounds, united by their desire to be seen, simply, as Quebeckers, rather than defined by their religious or ethnic identities.

Dr. Goldbloom was the recipient of several honorary doctorates and, in 2012, Pope Benedict XVI conferred on him a knighthood into the Order of St. Sylvester, in recognition of his nearly four decades of interfaith leadership and involvement; with his nomination, he became one of only a handful of Jews in the world to be so honoured. Well into his early 90s, Victor Goldbloom remained one of Canada’s pre-eminent spokespersons for inclusion, respect and friendship across religious, political, cultural and linguistic lines, and he continued to model “bridge-building” for a younger generation that has benefitted from his example, and from his many, many years of hard work and visionary witness in public life. Victor Goldbloom died in Montréal, on February 15, 2016.

Dr. Goldbloom on the importance of Jewish-Christian relations: https://www.youtube.com/watch?v=OaCo4E_8SH8

A short biography at “The Canadian French-Speaking World”: http://edimage.ca/edimage/grandspersonnages/en/carte_b07.html