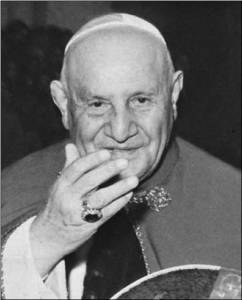 The man who would go on to become one of the most beloved Catholic leaders of modern times was born into a large peasant family on November 25, 1881, in the village of Sotto Il Monte, in Bergamo, and was named Angelo Giuseppe Roncalli. After his seminary studies, he was ordained a priest in 1904, and was sent to pursue further studies in canon law., and he later served as a professor of Church history at the local seminary. During the First World War, he served as a stretcher-bearer, a role that brought him face-to-face with the brutal reality of modern war and its victims.

In 1925, Angelo Roncalli began his career in Church diplomacy; he would serve, in turn, as the papal nuncio to Bulgaria, (1925-35) Turkey and Greece (1935-44) and France (1944-58). During the Second World War, he distinguished himself by his consistent, effective efforts to defend and save many of the victims of the Nazis, especially Jews who were threatened by death. Many historians say that, as a Vatican diplomat, he provided numerous immigration certificates (and, some say. false baptismal papers) which enabled thousands of Jews to escape to safety. In more than one case, his efforts succeeded in the liberation of Jews who had already been deported to concentration camps. Sometimes, Roncalli’s efforts involved sympathetic Nazi officials, such as the German Ambassador to Turkey, Franz von Papen; Roncalli would later write that von Papen’s actions had allowed Roncalli to try to save the lives of 24,000 Jews. In 1944, Isaac Herzog, the Chief Rabbi of Jerusalem, wrote to Roncalli:

I want to express my deepest gratitude for the energetic steps that you have taken and will undertake to save our unfortunate people, innocent victims of unheard of horrors from a cruel power which totally ignores the principles of religion that are the basis of humanity. You follow in the tradition, so profoundly humanitarian, of the Holy See, and you follow the noble feelings of your own heart. The people of Israel will never forget the help brought to its unfortunate brothers and sisters by the Holy See and its highest representatives at this the saddest moment of our history. (Letter dated February 28,1944)

In December of 1944, shortly after the Allied liberation of France, Pope Pius XII named Archbishop Roncalli as its new nuncio. Eight years later, in November 1952, he was informed that he had been named a cardinal by the Pope, and had been nominated as the new Patriarch of Venice, a role he assumed in 1953. After the death of Pius XII in October 1958, he took part in the conclave which elected him Pope on October 28; many assumed that, as an old man, his papacy would be short and uneventful. However, his choice of papal name—John XXIII—was surprising to many, since the previous Pope John had been a 15th-century antipope, and subsequent popes had shied away from the name, as if it were tainted. However, it was perhaps an early indication of other surprises that his papacy might hold.

In January 1959, Pope John surprised the Catholic Church, and the world, with the announcement that he intended to call an ecumenical council of the world’s Catholic bishops, to begin in 1962. It was intended to foster a new dialogue between the Church and the world, and to promote aggiornamento (“updating”) where necessary. One of the key areas where John XXIII sought to renew Catholicism was in its attitude toward Judaism. Early on in his papacy, he ordered the adjective “perfidious” (“faithless,” sometimes interpreted as “treacherous”) removed from the solemn Good Friday “Prayer for the Conversion of the Jews,” and, when a cardinal accidentally reinserted it during the 1960 Holy Week services at the Vatican, the Pope asked him to repeat it, in the corrected version.

In June 1960, Pope John received the French Jewish historian Jules Isaac in an audience at the Vatican and, in response to Isaac’s plea that the upcoming Council discuss a re-thinking of Catholic attitudes towards Jews, he promised action, and commissioned Cardinal Augustin Bea to form a team of scholars who could begin to draft a document on Judaism for Vatican II. That document, after considerable debate and re-working, would eventually become Nostra Aetate, the Council’s landmark 1965 declaration on non-Christian religions. Sadly, John would not survive long enough to see the end of the Council; he died of cancer on June 3, 1963, and was widely mourned in the Jewish world. In September 2000, Pope John Paul II declared him Blessed, and he was canonized as a saint by Pope Francis in April 2014. Yad Vashem (the International Holocaust Memorial in Jerusalem) is currently considering the possibility of naming John XXIII as one of the Righteous Among the Nations, for his wartime efforts to save Jews.