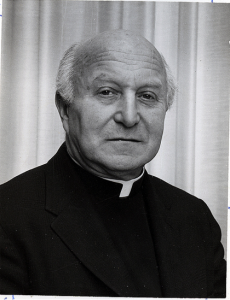 Today, there are several dozen centres around the world dedicated to studying the relationship between Christians and Jews. But it was Monsignor John Oesterreicher who deserves the credit for establishing the first of them, creating a new type of institution to reflect a new and very different way of thinking about how Jews and Christians could—and should—relate to each other.

Johannes Maria Oesterreicher was born into a Jewish family on February 2, 1904, in Město Libavá, in the region of Moravia, which is today part of the Czech Republic but which was, at that time, part of the Austro-Hungarian Empire. He began medical studies at the University of Vienna, but his reading of Cardinal John Henry Newman, coupled with a lifelong fascination with the story of Jesus, led him to choose to become a Catholic. He studied theology at the universities of Vienna and Graz (Austria) and he was ordained to the priesthood in 1927, initially serving as a parish priest. Newly-ordained, he watched the rise of Nazism in Germany in the 1930s, and decided to do what he could to oppose Hitler’s ideology; he founded an institute, and a journal (Die Erfullung, “The Fulfillment”), that countered Nazi anti-Jewish propaganda by demonstrating its irreconcilability with Christian teaching. When the Nazis invaded Austria in 1938, he was considered an enemy of the state for his views, and was interrogated by the Nazis. He fled, initially to London and Paris (where he continued to broadcast anti-Nazi sermons) and, eventually, to New York, where he arrived toward the end of 1940. Working as a parish priest, he continued to write and publish, including a book exploring the life-stories of seven Jewish philosophers who had converted to Christianity.

In 1953, he arrived at Seton Hall University (in South Orange, New Jersey), where he established the Institute of Judaeo-Christian Studies, the first university centre of its kind, dedicated to a scholarly exploration of the links between Judaism and Christianity, and promoting friendship and dialogue between those two faiths. In the lead-up to the Second Vatican Council, Oesterreicher (named a monsignor in 1961) and a group of his colleagues submitted a memorandum to the Vatican, suggesting that a document on Judaism should be part of the discussions at the upcoming council. Together with similar requests from several other institutions of higher learning, that memorandum contributed to Pope John XXIII’s decision to include a document on the Jews as part of the conciliar agenda; Msgr. Oesterreicher was formally asked to be part of the team that would draft the document.

Oesterreicher, who had fought so passionately against Nazi anti-Semitism, had a great sensitivity for the Jewish people, to whom he still considered himself linked by bonds of blood and affection. Oesterreicher brought both his own personal history, and his scholarly background, to the discussion, and to the drafting of a document that would eventually become the declaration Nostra Aetate (“In Our Time”), on the Catholic Church’s relationship to non-Christian religions; many historians suggest that he is largely responsible for its fourth and longest chapter, which is devoted to Judaism, and which developed theological themes that Oesterreicher had been discussing with colleagues for a number of years.

Following the Council, Msgr. Oesterreicher continued his work in Jewish-Christian dialogue, as a consultor to the Vatican’s Secretariat for Promoting Christian Unity (until 1968) and to the American Catholic bishops’ Secretariat for Catholic-Jewish Relations. He lectured widely on related topics, edited an influential series of studies called The Bridge, and published a number of books, including The Israel of God; On the Old Testament Roots of the Church’s Faith (1963), Brothers in Hope (1970), The Rediscovery of Judaism; A Re-Examination of the Conciliar Statement on the Jews (1971), and The New Encounter Between Christians and Jews (1986). Also in 1986, transcriptions of some of his wartime anti-Nazi messages were published as Wider die Tyrannei des Rassenwahns (Against the Tyranny of Race).

In 1975, Msgr. Oesterreicher established the Graduate Department of Judaeo-Christian Studies at Seton Hall, dedicated to fostering better understanding of the Jewish tradition on the part of Christians, and appreciating Judaism as a living, dynamic religion. Msgr. John Oesterreicher, a pioneer who had devoted his entire life to improving relations between Jews and Christians, died at the age of 89, on April 18, 1993—only a few months before the establishment of diplomatic relations between the Holy See and the State of Israel. The bulk of his papers are today part of the Monsignor Field Archives at Seton Hall.

“Converts’ Permanent Revolution: No Going Back on Vatican II, Despite Converted Clerics Role,” The Forward; online at http://forward.com/articles/160550/converts-permanent-revolution

John Connelly, From Enemy to Brother The Revolution in Catholic Teaching on the Jews, 1933-1965. Harvard University Press, 2012.