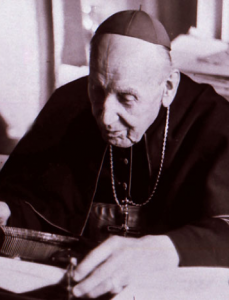 At an age when many people have long since retired, Augustin Bea found himself thrust into the heart of some of the most controversial debates in modern Catholic history—and became one of the quiet heroes of modern Jewish-Catholic relations.

Augustin Bea was born on January 28, 1881, in the town of Riedböhringen (Germany) and, because of his attraction to the world of scholarship, he pursued studies at several universities in Germany and Holland. In 1902, he joined the Jesuit order (=the Society of Jesus) and, on August 25, 1912, he was ordained a priest. Most of his adult life was spent as a scholar and educator, including serving on the faculty of the renowned Pontifical Biblical Institute in Rome from 1924 to 1949; in 1930, he was named as its rector, and he would hold that position for 19 years. Bea distinguished himself as a Biblical scholar, researching and writing extensively, assisting in the development of an improved Latin version of the Bible, and attending numerous scholarly conferences. It was during some of these conferences that Bea became friends with Protestant colleagues—and this marked the beginning of what would become a lifelong commitment to ecumenism and Christian unity.

Bea was a close confidant of Pope Pius XII, and was influential in the development of Pius XII’s landmark 1943 encyclical on the needed renewal of Biblical studies, Divino Afflante Spiritu. In 1945, Bea was named as the personal priest-confessor to Pope Pius, and he would continue in that role until the pope’s death in 1958. He remained a close papal advisor to Pope John XXIII, who in 1959 named Bea a cardinal. In 1960, Bea was nominated as the President of the newly-established Pontifical Secretariat for Promoting Christian Unity, and would serve in that role until his death.

On June 13, 1960, the French Jewish historian Jules Isaac took part in a very significant one-on-one meeting with Pope John, asking that the pope consider adding a document on the Jews to the agenda for the recently-announced Second Vatican Council. Several weeks later, Pope John forwarded Isaac’s materials to Cardinal Bea, asking that he gather a group of Catholic experts in Judaism, to begin drafting a document on Judaism for the upcoming Council, to address the longstanding Christian “teaching of contempt” regarding Jews and Judaism. Bea gathered a number of knowledgeable priests, who prepared the first draft of what was then called the “Decretum de Judaeis” (the decree on the Jews).

The document proved to be extremely controversial, both because of its challenges to cherished theological ideas, but also because some Arab countries opposed any action that would give validity to the young State of Israel; on several occasions, there was great uncertainty as to whether the decree would survive until a final, crucial vote on its contents. Many historians credit Cardinal Bea with a major role in “saving” the document: as a world-class Scripture scholar, his interpretations of difficult Biblical passages carried great weight with his brother bishops, and his personal reputation meant that, when he rose to speak in the Council hall, the other bishops hushed in order to hear him. Bea spoke with humility and quiet authority, and it was widely acknowledged that his views echoed those of the pope. Even after the death of John XXIII and the election of Pope Paul VI, Cardinal Bea was viewed by many as a wise, thoughtful and judicious interpreter of the Bible and Church teaching, and he did not hesitate to use his stature and voice to rally support for the document that, after several successive revisions, was eventually issued at the end of October 1965 as Nostra Aetate, the Declaration on the Church’s Relationship to Non-Christian Religions.

In the years after the Council, Cardinal Bea continued to work energetically for new Catholic attitudes toward Jews and non-Catholic Christians; his interreligious and ecumenical work remained the focus of his efforts well into his 80s, and one author has described him as “one of the outstanding ecumenists of the twentieth century”. In 1966, he published his own commentary on Nostra Aetate, titled The Church and the Jewish People, and he published several articles in newspapers, magazines and theological journals, presenting, explaining and defending key aspects of Vatican II’s teachings. He developed official relationships between the Catholic Church and several Protestant and Eastern Orthodox churches, and it was under his leadership that the first Vatican Directory on Ecumenism was published in 1967.

Augustin Bea died on November 16, 1968, and was buried alongside his parents in his hometown of Riedböhringen.

Vereb, Jerome M. “Because He Was a German!”: Cardinal Bea and the Origins of Roman Catholic Engagement in the Ecumenical Movement (Eerdmans Publishing, 2006).