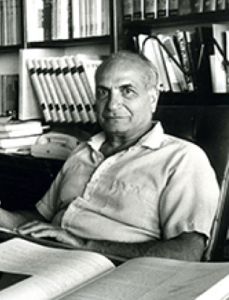 One of the principal architects of the modern Jewish-Christian friendship in the French-speaking world and in Israel, André Chouraqui is not as well known today as his many contributions and achievements would seem to warrant. André was born on August 11, 1917 in Algeria, into a devout and distinguished Sephardic Jewish family which had fled to North Africa just prior to the expulsion of Spain’s Jews in the late fifteenth century. Raised in a multi-religious (Jewish, Christian and Muslim) environment, he developed a curiosity about other religions (and an openness to them) from a very early age, which his family encouraged.

Having largely abandoned his religious practice during his years studying in secular French schools, it was the rise of Hitler and the Nazis, and their undisguised threats against Europe’s Jews, that led André to devote himself to a rediscovery of his Jewish identity through studies at France’s rabbinic seminary in Paris, until it was shut down by the Nazis. He spent the remainder of the war years in the French Underground, where he was struck by the fact that religious affiliation was apparently not a consideration to most of his comrades. After the war, disillusioned and stunned by the devastation of the Holocaust, he immediately began to work with other like-minded individuals in France (such as the French Jewish historian and interfaith pioneer Jules Isaac), to find ways to address anti-Jewish attitudes through education and friendship, to ensure that such atrocities would never again be possible. In 1958, he and his wife Annette settled in Israel, where he promptly became involved in the young country’s political and social life, first in the cabinet of Prime Minister David Ben Gurion, and later as Deputy Mayor of Jerusalem for six years under Teddy Kollek, during which he was respected as a bridge-builder between Jerusalem’s cultural, linguistic and religious groups.

A good friend of many Christian religious figures, André was personally present in Rome in September 1965 whenNostra Aetate was approved by the bishops at Vatican II. When he retired from politics in 1973, Chouraqui decided to dedicate himself to a longstanding dream of his: to translate the Bible into a new French version that would, he hoped, capture more of its literary and linguistic richness, but in a less “traditional” manner. His new translation, called simply La Bible Chouraqui, was dramatically different from previous translations, and immediately caught the imagination of many readers in the francophone world, for its rugged and unorthodox renderings, but also for the fact that he, an Israeli Jew, had chosen to translate, not merely the text of the Hebrew Scriptures (or Old Testament), but also the Greek New Testament. It was, he said, his attempt to highlight the Jewish context and content of the Christian Scriptures, their profound connectedness to Judaism, and the Jewishness of Jesus and the early Church. In the forty years since its initial publication, Chouraqui’s distinctive version has attracted both admirers and detractors, and earned him a number of awards and honourary doctorates. His translation (which he continued to improve and revise almost until his death in 2007) was eventually followed by a French translation of the Qur’an in 1990, making him probably the only person in history to have singlehandedly translated the holy books of the three Abrahamic religions—and giving him a unique insight into what they shared in common.

André Chouraqui was a tireless, vocal and articulate advocate of Jewish-Christian friendship and dialogue, and travelled widely, lecturing on that relationship and encouraging groups dedicated to building interreligious bridges. In the late 1970s, he (as an Arabic-speaking Israeli) worked behind the scenes to lay the foundations for the eventual Camp David peace accords between Israel and its southern neighbour, Egypt, and he was a ceaseless proponent of efforts to build peace and understanding between Israelis and Palestinians. He met with politicians and religious leaders of all types, sharing with them a lifetime of interreligious engagement and leadership, which he also distilled into three autobiographical books, and close to 30 other volumes on various historical, political and theological topics. After several years of declining health, André Chouraqui died in Jerusalem on July 9, 2007, and he was eulogized by a broad spectrum of Christian, Jewish and Muslim friends and colleagues (including Shimon Peres) and then-Prime Minister of France Nicolas Sarkozy, who praised Chouraqui’s many intellectual and interfaith accomplishments. Even eight years after his death, Chouraqui’s work continues to inspire a new generation of scholars and interreligious activists, who look to his ground-breaking work as a model of how passionate commitment, learning and personal warmth can make possible great strides in the work he was so dedicated to—a work that is by no means finished.

The Wikipedia entry on Chouraqui: http://en.wikipedia.org/wiki/Andr%C3%A9_Chouraqui

Watson, Murray. “Translation for Transformation: André Chouraqui and His Unique Contribution to Interfaith Dialogue and Friendship”; online at: http://goo.gl/G29QR6