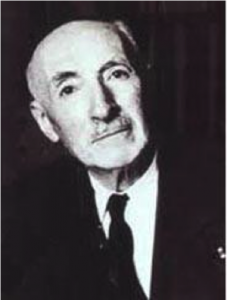 Born in Rennes (Aix-en-Provence), France, Jules Isaac grew up in a largely assimilated Jewish family, and pursued a career as a professional historian and academic. In France, he is perhaps best remembered as the co-author of the series of history textbooks (called “Malet—Isaac”) that was used for decades in French schools. Because of the respect in which he was held as a scholar, Isaac was appointed in 1936 as the Inspector-General of Schools for the whole of France, one of the most distinguished educational positions in the country. After the Nazi invasion of France during World War II, the newly-enacted anti-Semitic laws caused Isaac to lose his post (the French Minister of Education said at the time that “it was not acceptable for the history of France to be taught to French youth by an Isaac”). In late 1943, his wife and several of his immediate family were arrested and sent to a concentration camp; a number of them were subsequently murdered during theShoah simply because, as he later wrote, they bore the [Jewish] name of “Isaac”.

Isaac spent much of the war as a fugitive, staying in various safe-houses, and it was during this time that he decided to devote his scholarly energies to the question of the historical and theological roots of Christian anti-Judaism. Supplied with smuggled reading materials by sympathetic friends and colleagues, Isaac examined in detail twenty-one points where he believed traditional Christian teaching about Jews and Judaism desperately needed to be re-thought, to avoid possible the kinds of anti-Jewish or anti-Semitic attitudes that had largely enabled the Shoah to proceed unopposed. In 1947, Isaac presented his research to the newly-created International Council of Christians and Jews at its meeting in Seelisberg, Switzerland, and they formed the basis of that Conference’s now-famous “Ten Points of Seelisberg”. He eventually compiled his considerable research into a full-length book, published in 1948, called Jesus and Israel, which has since become a foundational text in modern Jewish-Christian relations. Isaac was one of the founders of the Amitié judéo-chrétienne de France (the French Jewish-Christian Friendship Association), and spend the remainder of his life arguing eloquently for a reform of Christian thinking and preaching about Jews, to avoid the mistakes and harm of earlier centuries.

Having attempted—with little success—to interest Pope Pius XII in his findings in 1949, Isaac was energized by the news, in 1959, that Pope John XXIII had called an ecumenical council of the world’s Catholic bishops (what would become known as Vatican II). In June 1960, Pope John received Isaac in an audience at the Vatican, and the historian presented his arguments, with an appeal for the Council to consider a radical reform of Catholic teachings about Jews; the Pope agreed with Isaac, and entrusted his dossier of materials to Augustin Cardinal Bea, a distinguished Jesuit Biblical scholar and ecumenist, who was asked to gather a group of experts and begin drafting a document “On the Jews” for the Council’s deliberations. That document—after a long, circuitous and often uncertain path, many intrigues and major revisions—was eventually approved in October 1965 as Nostra Aetate, Vatican II’s landmark declaration on the Catholic Church’s relationship to non-Christian religious traditions. Sadly, however, Isaac did not live to see the outcome of his efforts; he died in September 1963, but is rightly considered today as one of the major figures whose efforts contributed to the renewal of Christian thinking about Judaism, and as one of Europe’s great interfaith pioneers.

Feldman, Egal. “The Revolt of the Bishops, 1960-75.” Chapter 7 in Catholics and Jews in Twentieth-Century America. Urbana, IL: University of Illinois Press, 2001.

Robberechts, Edouard. “Introduction to the Life and Work of Jules Isaac”. 2013 International Conference of the International Council of Christians and Jews; online at: http://www.iccj.org/redaktion/upload_pdf/201307121332010.Sunday-Opening-Edouard-Robberechts.pdf