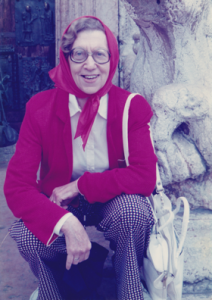 (The biography below is taken, almost entirely, from the biography of Charlotte Klein written by Mary Kelly, NDS: “Pioneers in the United Kingdom: A Positive Beginning.”SIDIC Review 30:2 (1997): 9-13, and available online at: http://www.notredamedesion.org/admin/dialogue_sidicView.php?id=574). Edited or added material is underlined.

Charlotte Klein was born in Berlin in 1915 and brought up in a pious Orthodox Jewish home. She was a headstrong, passionate, impulsive personality with a great zest for life. As she grew to adolescence, she threw off religious observance whenever she could. However, the catastrophic Nazi regime came to power and the Klein family left Germany for Palestine (as it was then known). Antisemitism was thus a personal experience for her.

After becoming a Christian and joining the Sisters of Sion in Jerusalem, Charlotte Klein rediscovered the beauty and truth of Judaism and became aware of the teaching of contempt for Judaism in Christian teaching and the history of antisemitism in the Church. Writing her doctorate thesis for London University on “The Image of the Jew in German and English Fiction and Drama 1833-1933,” she strove to overcome antisemitism wherever she encountered it and published articles on antisemitism in English society, on the Vatican and antisemitism and anti-Zionism, on ritual murder and the Dreyfus Affair. A gifted teacher and linguist, she became known internationally as a lecturer in Germany, Italy, Belgium, North America and taught at universities in England, Germany and the United States. A number of her articles were published in the Journal of Ecumenical Studies.

However, her most important work was within the Church. It can be divided into four main areas: 1) Overcoming Christian Anti-Judaism; 2) Fostering a true image of Judaism among Christians; 3) Encouraging Jewish-Christian Dialogue; 4) Promoting a new theology of the Jewish-Christian relationship.

In 1962, with the encouragement of her Order, she founded the Study Centre for Christian-Jewish Relations, the aim of which was to foster a better understanding of Judaism and the Jewish-Christian relationship in the Church. As well as a specialized library, an educational programme was launched. A series of pamphlets explaining the Jewish roots of Christianity and those texts of the Gospels that have been difficult for Jewish-Christian relations were published, as well as a commentary on the Sunday lectionary. She followed closely the deliberations of the Vatican Council, briefing Cardinal Heenan who was a member of the Vatican Secretariat responsible for the Declaration on relations with Judaism. During and after the Council, she wrote articles and gave lectures under both Jewish and Christian auspices explaining aspects of the Second Vatican Council’s declaration Nostra Aetate. She was instrumental in setting up the U.K. Bishops’ Commission to Implement the Declaration and was a founding member of the London Rainbow Group. Her lecture tours in Germany led to the foundation of the first house of the Sisters of Sion there.

Her experience of teaching at St. Georgen in Frankfurt motivated her to publish her book Anti-Judaism in Christian Theology (first published in German [1975] and later in English [1978]), in which she showed that “the text-books studied by Christian theological students in Germany, and to a lesser extent in France, are full of all the old prejudices against the Pharisees, and against Judaism generally, as if the authors had learnt nothing at all either from modern scholarship or from modern history” (John D. Rayner, An Understanding of Judaism, 1987).

As well as the pamphlets of the Study Centre she published in various journals 47 articles in English, 4 in German, 1 in Italian and I in Swedish. Although well known for her research into antisemitism and for forging a new relationship between the Church and the Jewish people, it became more and more apparent to her that the latter raised questions for Christian self-understanding. It seemed imperative that theologians take seriously the questions posed to the Church’s theology by Judaism. She wrote briefly on this question herself. After her death, as a fitting tribute to her, a conference of theologians on Christology and Religious Pluralism was organized. Some of the proceedings have been published (In Memoriam Charlotte Klein: Christology and Religious Pluralism; see below for details).

Writing after her death, Charlotte’s nephew, Dr. Jacob Klein, recalled his aunt as “a cultured woman with a warm sense of humor, a strong sense of duty, and … a survivor of her early traumas, no doubt induced by her life in Hitler’s Germany”; others remembered her as “a remarkable woman” and a gifted teacher. She was an eyewitness to the birth of the modern State of Israel, and to the transformation that took place in her own religious order, the Sisters of Our Lady of Sion, in the decades after World War II. That transformation—which she helped to prepare and advance—is summed up beautifully in the text of the Sisters’ Constitutions today: “Our vocation gives us a particular responsibility to promote understanding and justice for the Jewish community, and to keep alive in the Church the consciousness that, in some mysterious way, Christianity is linked to Judaism from its origin to its final destiny” (#14). It was a vision Charlotte Klein passionately believed in, embodied and has left as a legacy to those who continue her work today.

Klein, Charlotte L. “From conversion to dialogue—the Sisters of Sion and the Jews: A paradigm of Catholic-Jewish relations?” Journal of Ecumenical Studies 18:3 (June 1, 1981): 388-400.

Kelly, Mary, NDS. In Memoriam Charlotte Klein: Christology and Religious Pluralism (the Universal Significance of Christ and the Validity of Other Faith Traditions). London: Sisters of Sion, 1990.

A bibliography of Charlotte Klein’s work (in both German and English) has been compiled by Dieter Kittlauß, and is available online at: http://www.bendorf-geschichte.de/bdf-0134/klein-12.htm