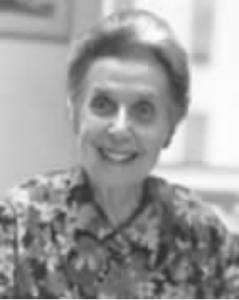 A native of France and a longtime citizen of the United States, Claire Huchet Bishop had the unique ability to pen prize-winning stories that captured the imaginations of generations of children—and also to provide leadership on some very adult problems, such as anti-Semitism.

Born in 1899, Claire grew up in a family in which story-telling was a prized tradition. She was a writer from an early age and studied at the Sorbonne (the University of Paris), but she sensed that she would not find fulfillment in an academic life. Her great passion for literature led her to help establish France’s first children’s library, called “L’Heure heureuse” (The Happy Hour) in 1924, and she served for five years as its founding director. After her marriage to the American concert pianist Frank Bishop, Claire moved to the United States and joined the staff of the New York City Public Library.

There, her skills as a story-teller quickly made her a popular and much-loved figure; a number of her books began as oral stories told to young library patrons. It was as a prize-winning author of roughly thirty children’s books that Huchet Bishop was best known, from The Five Chinese Brothers (1938) to her 1973 book Georgette. Some of her books were historically rooted and richly realistic, while others were more fantastic or whimsical. Written in English or French, they were translated into a dozen languages, and at least two of them were eventually made into movies. Two of her books were runners-up for the prestigious Maybery Award (the premier prize for children’s literature), and for decades she reviewed children’s books for several American publications.

Many of Huchet Bishop’s readers do not realize, however, that this distinguished children’s author was also, for many decades, a thoughtful and articulate social commentator, with a particular devotion to the cause of Jewish-Christian relations, and a life-long commitment to fighting against anti-Semitism, rooted in her sensitivity to the sufferings of her Jewish friends during the Second World War. One of her books, Twenty and Ten, is set during the Nazi persecution of Europe’s Jews during the Holocaust. As several Amazon.com reviewers summarize it:

Based on a true story, this book tells of a tale in which ten Jewish children are brought to a small Catholic school in the countryside of France up in the mountains. There are currently twenty students at this school. The Sister asks the students if they will be capable of hiding the Jewish children from the Nazis and they agree. These fifth graders perform this humanitarian deed fully aware that their own lives are at risk. Thus the children play and learn together until one day Sister does not return from town and the Nazis arrive at the school looking for the Jewish children … The children band together to protect their refugee guests and devise a plan not to accidentally reveal their location. How can they prevent each other from blurting out their life-threatening secret, when interrogated by zealous soldiers who offer chocolate bribes? Can mere children foil the suspicious and brutal Nazis—expert in the tactics of “terror torture”? Based on a real incident, this little book provides serious thought and much literary tension for readers of all ages … Even children can help in an adult world by proving their moral courage when faced with a global evil.

A devout Catholic, Huchet Bishop played a key role in helping to change Christian attitudes toward Jews and Judaism. In 1966, she published Yeshu, Called Jesus, which creatively explored Jesus’ Jewish childhood. She went on to edit English translations of the books of Jewish-Christian pioneer Jules Isaac (including his classic Jesus and Israel), and in 1974, she published How Catholics Look at Jews: Inquiries Into Italian, French and Spanish Teaching Methods, which summarized a number of in-depth studies into how European religious textbooks spoke about Jews (similar to the work done on American texts by Sister Rose Thering OP). From 1968 to 1981, she was the president of the Jewish-Christian Friendship Association of France and, from 1975-77, the president of the International Council of Christians and Jews. In March of 1993, Claire Huchet Bishop died in Paris, bringing an end to a rich and diverse life, and leaving a wonderful legacy, for children and adults alike.