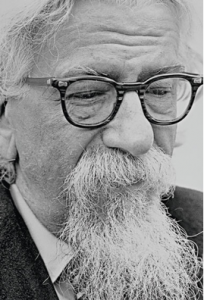 Arguably one of the most influential Jewish thinkers of the twentieth century, Abraham Joshua Heschel was born in Warsaw on January 11, 1907, the descendant of two prominent rabbinic dynasties. He grew up in a traditional Hasidic family, and studied in a rabbinic seminary before receiving his ordination (smikha) as a rabbi in 1927. From his teenage years, however, Abraham demonstrated an independent streak, and an interest in more secular learning. In 1937, he received his doctorate from the University of Berlin, went on to teach Talmudic studies in Berlin, and received a second ordination from a more liberal stream of Judaism. In October 1938, the Nazis deported him to Poland, and he later emigrated from there to England. Eventually, Heschel moved to the United States, where he would spend the rest of his life, first as a professor at Hebrew Union College in Cincinnati, and later as a professor of Jewish ethics and mysticism at the Jewish Theological Seminary of America, where he was a distinguished scholar and popular lecturer until his death in 1972. He married Sylvia Strauss in 1946, and their daughter, Susannah Heschel, was herself ordained as a rabbi, and has become a prominent scholar of Jewish studies and a leader in the Jewish-Christian relationship.

Heschel is known today equally because of his extensive work as a scholar, and because of his prominent role as a leader in the social justice and anti-war movements in the United States in the 1960s. He published a wide range of books and articles on Jewish philosophy and ethics, on Biblical topics, the classical rabbinic sources, Jewish life and Hasidic thought. Among his best-known works are his 1951 classic The Sabbath: Its Meaning for Modern Man (on the meaning and spirituality of Shabbat in the Jewish tradition), Man Is Not Alone: A Philosophy of Religion (1951),God In Search of Man (1955), and his1962 volume The Prophets (based on his earlier doctoral work), all of which remain standard references in their fields more than 50 years after their original publication. Heschel was particularly known for his ability to bring the insights of his Jewish tradition to bear on modern issues in creative and relevant ways, and he was deeply convinced that the message of the Hebrew Prophets was profoundly contemporary, necessary—and often largely neglected. “Intellectual evasion is the great sin of contemporary Jewish teaching …Urgent problems are shunned, the difficulties of faith are ignored”. That conviction was one important reason why he became involved in the American civil rights movement of the 1960s. He first met the Reverend Martin Luther King, Jr. at a conference on race relations in 1963, and became a vocal ally and supporter of King’s efforts to end segregation and obtain greater equality for African Americans. In March of 1965, Heschel stood alongside King in his now-famous March from Selma to Montgomery; King affectionately referred to Heschel as “my rabbi”.

In the immediate lead-up to the Second Vatican Council, Rabbi Heschel met with Pope John XXIII, and offered in-depth suggestions about how the Council might begin a revision of Catholic teachings about Jews and Judaism. As a delegate of the American Jewish Committee, he followed the deliberations closely, was personally present for much of the Council, and worked tirelessly behind the scenes, to educate Church leaders about the need for a new Catholic approach to Judaism. At a time when it seemed that the suggested document would emphasize the Christian obligation to convert Jews, Heschel said: “Jews throughout the world will be dismayed by a call from the Vatican to abandon their faith in a generation which witnessed the massacre of six million Jews and the destruction of thousands of synagogues on a continent where the dominant religion was not Islam, Buddhism, or Shintoism”. He was a close friend and colleague of Cardinal Augustin Bea, Nostra Aetate’s greatest defender at Vatican II, and many scholars have acknowledged Heschel’s significant influence in helping to shape the final form of the Council’s 1965 document on interfaith dialogue. Nostra Aetate.