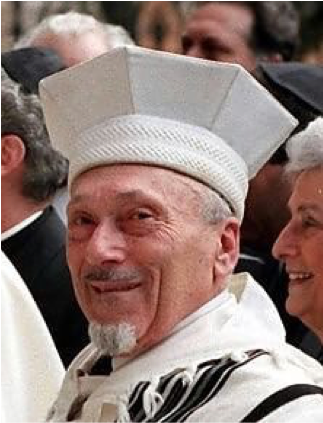 For a momentous half-century, he served as Rome’s Chief Rabbi, guiding the Jewish community of the Eternal City through tremendous joys and significant chal­lenges and changes—and, through it all, becoming one of the most beloved and respected leaders of Euro­pean Judaism.

If modern Jewish-Christian relations were to have a “grandfather,” Rabbi Elio Toaff would seem like one of the most obvious candidates for that title. For a momentous half-century, he served as Rome’s Chief Rabbi, guiding the Jewish community of the Eternal City through tremendous joys and significant chal­lenges and changes—and, through it all, becoming one of the most beloved and respected leaders of Euro­pean Judaism.

Born on April 30, 1915, Elio Toaff was a native of the Italian city of Livorno, where his father, Alfredo, would serve as rabbi from 1924 to 1963. Elio studied concurrently at Livorno’s rabbinical college and at the University of Pisa’s faculty of law, graduating in 1938, just as the Italian Fascist government began to impose harsh racial laws that barred Jews from university and other public institu­tions; he was ordained a rabbi in 1939. From 1941 to 1946, he served as the rabbi of Ancona, and from 1946 to 1951, as Chief Rabbi of Venice. In reflecting on his own wartime experience, Rabbi Toaff would later say that his father had taught him that rabbis were never allowed to abandon their communities. At one point, he and his family did flee for several days to a town in northern Tuscany after he had received death threats, and they were taken in and hidden by the local Catholic priest. Toaff was part of the Italian Resistance, and was an eyewitness to many wartime atrocities. He was also a defender of the efforts of the wartime pope, Pius XII, to assist persecuted Jews: “Jews will always remember what the Catholic Church did for them by order of the pope during the Second World War. When the war was raging, Pius spoke out very often to condemn the false race theory”.

In 1951, Toaff was offered the position of Chief Rabbi of Rome, which had been vacant for nearly eight years. The ancient Roman Jewish community had been decimated by the Second World War, with thousands of Jews deported under the Fascist and Nazi régimes, and it had struggled with some painful internal issues. It was in need of sensitive, wise leadership and much healing; this was the mission entrusted to the 36-year-old Toaff when he took on the mantle of Chief Rabbi, a position he would go on to hold for more than fifty years. His tenure as Chief Rabbi was a time of much-needed physical, psychological and spiritual re-building. In addition to his specific responsibilities at the Tempio Maggiore (the main synagogue of Rome), Chief Rabbi Toaff also served for many years as the director of the Italian Rabbinic College, as president of the Italian Rabbinic Consultation, headed the Institute for Advanced Jewish Studies, and edited the Yearbook of Jewish Studies. He was a founding executive member of the Conference of European Rabbis in 1957, and was a longtime Conference member.

But it was perhaps for his interfaith outreach that Toaff became best known. He had personally witnessed the extraordinary Saturday morning in the early 1960s when Pope John XXIII, who was driving past the Rome synagogue, halted his limousine and stepped out to give his blessing to the Jews who were leaving Sabbath services there; in June 1963, Toaff returned that friendship by bringing a small delegation from the synagogue to pray in St. Peter’s Square for the dying pope. It was Toaff’s invitation that led Pope John Paul II to make his historic 1986 visit to that same synagogue (the first pope to visit a Jewish place of worship in more than 1900 years!), and the photo of a beaming Toaff embracing a beaming John Paul on the steps of the synagogue has become one of the most iconic images of how Jewish-Christian relations have been transformed since World War II.

It was widely noted after Pope John Paul II’s death that his last will and testament mentioned only two living individuals: his personal secretary … and Rabbi Toaff, who was clearly touched: “John Paul thought of me at least in part as much as I thought of him”. Although Rabbi Toaff formally stepped down as Chief Rabbi in 2002, he was still present to welcome Pope Benedict XVI when he reprised John Paul’s synagogue visit, in January of 2010. Toaff’s 1987 spiritual autobiography, Perfidi giudei, fratelli maggiori [Perfidious Jews, Elder Brothers], chronicled much of that Jewish-Christian transformation, which he had witnessed, and in which he had played such a central role as a bridge-builder, and willing partner with Christian leaders. Rabbi Elio Toaff died in April of 2015, just short of his 100th birthday. Pope Francis paid tribute to him as “a key figure in Italian Jewish and civil history,” and praised “his moral authority, linked to a profound humanity”.

He was predeceased by his wife Lia, but survived by a daughter and three sons, including Rabbi Ariel Toaff, a distinguished Jewish historian. The elder Rabbi Toaff, who one press report referred to as “the most-loved rabbi,” was buried in his native Livorno. The Elio Toaff Foundation continues to pursue his work and to promote his vision.