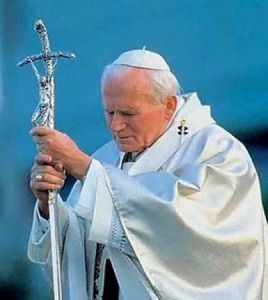 The man who was arguably the greatest champion of modern Jewish-Christian dialogue was known to the world as John Paul II (or “JP2” to many), but when he was born, on May 18, 1920 in Wadowice, Poland, his birth name was Karol Wojtyła. Karol’s mother died when he was only 8, and he was raised by his devoutly Catholic father. During his youth in Wadowice, the athletic Karol had many friends among the town’s Jewish children, and often played soccer against (or with) them; some of those friendships would be life-long, and would play an important role in the man he would become.

By the time the Second World War broke out in 1939, Karol and his father had moved to Kraków, where the younger Wojtyła was enrolled in the Jagielllonian University, studying philosophy and languages. The Nazi invasion of Poland closed the university and, from 1940 to 1944, Karol worked as a labourer; he also began clandestine studies for the Catholic priesthood in an underground seminary. A number of eyewitnesses have spoken of the ways in which Karol actively supported and cared for persecuted Jews during and after the war, including a 14-year-old Jewish girl named Edith Zierer who escaped from a Nazi concentration camp, weakened and unable to walk, who later credited the young Karol Wojtyła with saving her life. On November 1, 1946, Karol Wojtyła was ordained a priest and, after graduate studies in Rome, he returned to Poland, where he combined parish pastoral work and university teaching. In July 1958, he was named auxiliary bishop of Kraków and, in 1964, became its archbishop. In June of 1967, Pope Paul VI named him a cardinal.

In October 1978, following the death of Pope Paul VI, and the sudden, unexpected death of Pope John Paul I, the world was surprised when Cardinal Wojtyła (whose name was unknown to many) was elected, taking the name John Paul II. From the beginning of his papacy, the new pope signalled that Jewish-Catholic relations would be a priority for him: his first private audience was with a Jewish childhood friend, Jerzy Kluger, and Kluger’s family. In 1979, during his first official visit to his homeland, John Paul II became the first pontiff to visit the Auschwitz concentration camp, where he prayed and called for remembrance of all those murdered by the Nazis. In 1980, during a speech to West Germany’s Jewish community, he spoke of Jews as “the people of God of the ancient covenant, never revoked by God”—a dramatic statement which continues to inspire theological reflection today.

During his dozens of international journeys, John Paul II regularly sought to meet with local Jewish communities, and he welcomed numerous Jewish groups and leaders to the Vatican. In the spring of 1986, he became the first Pope since St. Peter to visit a synagogue, when he was welcomed to Rome’s Tempio Maggiore by its Chief Rabbi and community, and he spoke there of the unique and unshakeable bonds which unite Jews and Christians, affectionately calling Jews the specially beloved “elder brothers” of Christianity. It was with Pope John Paul’s active encouragement that diplomatic relations were established between the State of Israel and the Holy See in 1993, after years of delicate negotiations—a major breakthrough, both politically and religiously. In 1997, he oversaw the publication of the first official Vatican document on the Holocaust (“We Remember”)—acknowledged as an important step forward (although not without its own controversies at the time).

The jubilee year 2000 was also a landmark year for Catholic-Jewish relations under John Paul II: in March, he led a “liturgy of repentance” in St. Peter’s Basilica, in which he asked forgiveness of God for sins committed by Christians against the Jewish people, and committed the Church to a pathway of respect and cooperation. A few weeks later, he made history by becoming only the second modern pope to visit Israel, meeting with its religious and political leaders, and solemnly recalling the Holocaust at Yad Vashem, where he laid a wreath to honour its victims, and met with a number of Polish survivors. In one of the most memorable images of his papacy, the 80-year-old pope prayed at Jerusalem’s Western Wall, inserting a copy of his earlier prayer from the Rome liturgy between its stones, a gesture that many Jews and Christians have performed throughout the centuries.

Under the pontificate of John Paul II, a number of major Vatican documents were issued which expanded and built upon Vatican II’s 1965 declaration Nostra Aetate, and Pope John Paul himself modelled for many Christians an attitude of respect, love and esteem for Jewish people, who had always been an important part of his life, his priesthood and his papacy. After several years of declining health, he died in April 2005, widely mourned by Jews, both in Israel and around the world, and remembered fondly for his many revolutionary actions to improve Jewish-Christian relations. In 2014, Pope Francis declared him a saint of the Catholic Church. Ten years after his death, his legacy continues to inspire and guide modern Jewish-Christian relations, and his considerable writings on this topic provide a rich source for study, and a springboard for further progress in this twenty-first century.

“The Pope and I: John Paul II, according to his Jewish childhood friend”: https://www.youtube.com/watch?v=A_JcGStJkSY

“‘A Blessing to Each Other’: An exhibit to honor John Paul II’ss relationship with Jews”:https://www.youtube.com/watch?v=0_VPa3F4AnM