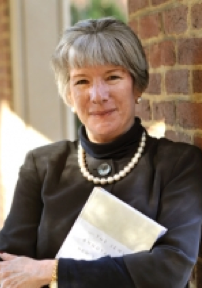 Articulate, insightful, brilliant and wickedly funny—all of those are terms which aptly describe Dr. Amy-Jill Levine, a prominent and prolific scholar of Christian-Jewish relations, early Christianity and feminist Biblical interpretation. Raised in a predominantly Catholic neighbourhood in Massachusetts, she grew up knowing and loving many aspects of the Christian tradition—although she is herself an Orthodox Jew. Her youth was so thoroughly steeped in Catholic culture that, as a young girl, she had some surprisingly Catholic ambitions:

When I was a little girl, I came home from school one day and the only thing that was on TV was the funeral of Pope John XXIII, and I was looking for cartoons. I remember asking my mother why the cartoons weren’t on. Who was this guy? Why is he so important that he’s on every network? … And my mother said, “Oh, that was Pope John XXIII; he was good for the Jews”. John XXIII was known for rescuing Jews during the Holocaust. And I somehow picked up the idea that he was in Rome, which to me meant you got to eat spaghetti. So I announced to my mother, “I want to be pope.” My mother said to me, “But you can’t be pope.” And when I indignantly said, “Why not?” She said, “Because dear, you’re not Italian.”

From a very early age, Amy-Jill learned an appreciation for, and an openness to, Christianity that her parents encouraged. It was, however, an ugly encounter with a 7-year-old peer that changed the direction of her life. “You killed our Lord,” the little girl said to her—and that accusation led her to delving more deeply into Christianity and its Scriptures and, eventually, to becoming one of today’s leading Jewish scholars of Jesus and the New Testament. After receiving her PhD from Duke University, she went on to teach at Vanderbilt University’s Divinity School, which has been her scholarly home since 1994. She has held executive positions in the Society of Biblical Literature, the Catholic Biblical Association, and the Association for Jewish Studies, and is the recipient of numerous honorary doctorates for her work.

Dr. Levine’s scholarly publications are extensive, and include feminist commentaries on most of the New Testament, on the early Christian apocrypha, and studies on the figure of Mary, the mother of Jesus. In recent years, however, her work has focused more specifically on the figure of Jesus, and how traditional Christian interpretations of Jesus have often caricatured or misrepresented ancient Judaism in ways that have been deeply damaging to relations between Jews and Christians. In 2006, she published The Misunderstood Jew: The Church and the Scandal of the Jewish Jesus, in which she examined the longstanding Christian hesitation to accept the reality of Jesus’ Jewishness, and the tendency to exalt Christianity by putting down Judaism. Together with Marc Zvi Brettler, she edited the ground-breaking Jewish Annotated New Testament (Oxford University Press, 2011), in which 50 Jewish scholars contributed detailed commentary and essays throwing light on challenging passages and issues in New Testament interpretation. Most recently, she has published Short Stories by Jesus: The Enigmatic Parables of a Controversial Rabbi (HarperOne, 2014), in which she examines some of the best-known and most-loved Gospel parables, and examines how a more accurate knowledge of first-century Judaism and its world can yield more accurate and more life-giving interpretations which do not need to rely on distorted or false portrayals of Judaism.

Dr. Levine is a highly sought-after speaker and commentator on Jewish-Christian matters, and is outspoken about the need for Jews and Christians to come to know each other better, and more accurately. As she said in a 2010 interview, “Scriptural illiteracy is high, but so is illiteracy when it comes to the interpretation of Scripture. It’s helpful to know Jewish Scripture in order to understand Judaism, but we cannot read Leviticus and know what’s going on in the local synagogue. I’ve had people ask me if Jews in urban areas need zoning variances in order to sacrifice animals. Their view was that Judaism equals Leviticus, and if Leviticus says this is what you must do, then that’s what Mrs. Goldberg down the street must be doing. So both scriptural illiteracy and illiteracy regarding the ongoing traditions, and indeed the diversity within the ongoing traditions, are problems.” Amy-Jill Levine is an outstanding example of a new openness between the Jewish and Christian communities, and how both traditions are growing, learning and being enriched from their encounter with the other.