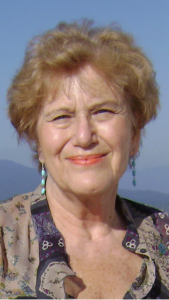 The Italian term “Vaticanista” is often used to describe journalists who have dedicated their careers to analyzing and writing about the papacy and Vatican affairs. Among the dozens who might claim this title, Lisa Palmieri-Billig is unquestionably one of the most experienced, and most knowledgeable—and her long career in this field has given her a unique eyewitness perspective on the unfolding of modern Jewish-Christian relations.

A native of Vienna (Austria), Lisa was brought by her family to New York City in 1938, right after Hitler’s “Anschluss,” to escape from the Nazis. Growing up in New York, she received her B.A. from Barnard College, and her M.A. from Columbia University Teachers College. In 1961, she moved to Rome, where she taught English language and literature. In 1963, she became a member of the World Jewish Congress’s staff in Rome, which enabled her to closely follow some of the dramatic events during the Second Vatican Council, including the debate on (and eventual approval of) its now-famous declaration on non-Christian religions, Nostra Aetate, in October 1965. It was in Rome that she met and married her husband, an Italian writer.

It was during these years as well that she became the Rome correspondent for the Jerusalem Post, a role that she has fulfilled for the past 50 years, and beginning her distinguished career as a journalist and commentator on political and religious matters. Fluent in Italian, French, German and English, Lisa has seen her work published in numerous newspapers and journals in Italy, in Israel and around the world

Although she has published significant interviews with key Jewish figures, much of Palmieri-Billig’s writing has been dedicated to the papacies of Paul VI, John Paul II, Benedict XVI and Francis. She was the first Jewish journalist to interview then-Cardinal Joseph Ratzinger, twenty-five years before he would be elected as pope; that interview, titled “Jews and Judaism in the Universal Catechism,” was published in journals in both English and Italian in 1990. Today, she still corresponds for The Jerusalem Post as well as for La Stampa newspaper’s “Inside the Vatican” section (for which she recently interviewed Vatican Secretary of State, Cardinal Pietro Parolin), as well as being the Rome-based freelance contributor for a number of publications in several languages, writing on major political and religious issues in Jewish life and Jewish-Christian dialogue, and on contemporary social questions.

Lisa’s impressive literary and journalistic work has been paralleled by a long career as a leader in the field of interreligious dialogue. She served as the founding President of Rome’s Amicizia ebraico-cristiana (Jewish-Christian Friendship Association), was for 25 years the Vice-President of the European section of the World Conference of Religions for Peace, and continues to serve in the leadership of its Italian section. She has for many years been active in the work of the International Council of Christians and Jews (ICCJ). For 18 years, Palmieri-Billig was the Representative of the Anti-Defamation League in Rome and its Vatican liaison—a position she now holds for the American Jewish Committee since 2005. She is a contributor to the 2007 Encyclopaedia Judaica, with articles on Italy and the city of Milan, and has authored several publications of the Anti-Defamation League, including a 1992 study of anti-Semitism in Italy, a 2001 examination of new directions in interreligious dialogue, and in 2005 she contributed to an AJC in memoriam volume on Pope John Paul II, together with Rabbis David Rosen and James Rudin.

For half a century, Lisa Palmieri-Billig has enjoyed a privileged viewpoint from which to view and assess the transformation in Jewish-Christian relations that resulted from the painful events of the Second World War, and the dramatic changes in many contemporary Christian churches. Her continued energy and enthusiasm—and the unique witness she offers—are a gift to younger generations, and a valuable reminder of how far that dialogue has come—and what issues still remain to be grappled with, deepened and better understood as we move forward together as friends.