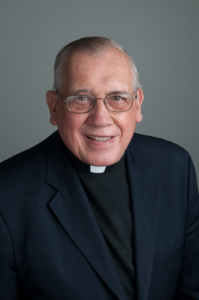 It is hard to find an English-language book on Jewish-Christian relations written in the last 30 years that does not either reference, or include a contribution from, Servite Father John Pawlikowski. A native of Chicago, born in 1940, Pawlikowski is one of the most prolific and respected contemporary writers and speakers on the Holocaust, and on the dramatic change in Christian attitudes toward Jews in the decades since the Second World War; his published work includes dozens of books and hundreds of lectures and scholarly articles. Much of Pawlikowski’s time as a university student coincided with Vatican II, and much of his energy in the years since has been dedicated to unpacking, teaching and furthering the Council’s vision regarding interreligious dialogue. An early student of John Dominic Crossan (a leading scholar of the historical Jesus and early Christianity, who was a Servite priest at the time), Pawlikowski attributes much of his passion for Jewish-Christian dialogue to Crossan’s teaching back in the 1960s:

In his courses at the Servite theologate, Crossan instilled in me a tremendous respect and an appreciation for sacred scripture and an interest in the long history of Christian anti-Semitism, which he saw as rooted in New Testament interpretation. Crossan delivered one of the earliest lectures on anti-Semitism and the New Testament in light of

Nostra Aetate at a public series on the Second Vatican Council held at Chicago’s Loyola University … I was in the audience that evening as a proud student.

And yet Pawlikowski would later come to realize that some aspects of Crossan’s Biblical interpretation remained troublingly mired in earlier approaches, which exalted Christianity at the expense of Judaism: “It became apparent to me how deep-seated and yet subtle anti-Semitism remains in Christian self-understanding so that even those who staunchly oppose its outer manifestations sometimes remain unaware of its subtle dimensions … Without his encouragement in the midst of the new spirit of the Vatican Council, I doubt I would have ever made Christian-Jewish relations such a central part of my academic and ministerial career”.

Ordained a priest of the Servite Order in 1967, John Pawlikowski joined the faculty of Catholic Theological Union in 1968, where today he is Professor of Social Ethics, the director of its Cardinal Bernardin Center for Theology and Ministry, and of its Catholic-Jewish Studies programme. For more than four decades, he has been a leader in Jewish-Christian dialogue on the local, national and international levels, serving as a consultant to the U.S. Catholic bishops’ Advisory Committee on Catholic-Jewish Relations, to the National Council of Churches, and serving several times on official Vatican delegations to international Jewish-Catholic dialogues. In 1980, then-President Jimmy Carter appointed him as a founding member of the United States Holocaust Memorial Council, an appointment that was renewed by Presidents George W. Bush and Bill Clinton; Pawlikowski continues to play a leading role in the Holocaust Memorial’s educational and interfaith outreach work.

In 1961, Sister Rose Thering OP had received her doctorate for a dissertation on the treatment of Jews and Judaism in Catholic religious textbooks; two of her colleagues had undertaken similar studies in social studies and literature textbooks. Sister Rose felt, however, that her findings would only be considered credible if published by a priest, and she suggested Pawlikowski for the role. His 1973 book, Catechetics and Prejudice: How Catholic Teaching Materials View Jews, Protestants and Racial Minorities (Paulist Press), synthesized those studies’ key findings, and shared them with a wider audience. As Sister Rose herself later admitted: “He gives me credit in the book. However, it’s a priest who’s telling it, which at that time was acceptable … The findings had to come out.”

In the year 2000, Father Pawlikowski was elected as a Vice-President of the International Council of Christians and Jews (ICCJ) and he served as the ICCJ’s President from 2002 to 2008; in 2014, the ICCJ named him one of its honorary Presidents, in recognition of his outstanding contributions to promoting positive relations between the Jewish and Christian communities. His work was further honoured by his peers with the conferral of the Catholic Theological Society’s 2014 John Courtney Murray Award, and with an honorary doctorate from Australian Catholic University. Father Pawlikowski maintains a demanding schedule of teaching and lecturing worldwide, challenging his listeners to put contemporary Church teaching about Jews and Judaism into practice, and exploring new and promising avenues of theological reflection and social engagement.

Korn, Rabbi Eugene B. and John Pawlikowski, eds. Two Faiths, One Covenant?: Jewish and Christian Identity in the Presence of the Other. Lanham, MD: Rowman & Littlefield, 2005.