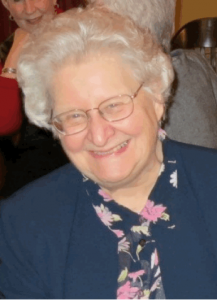 The world of biblical scholarship has been one of the most fruitful and creative areas of Jewish-Christian interaction in the last half-century—and Dr Eileen Schuller, one of Canada’s most respected Scripture scholars, has been right at the forefront of some of those scholarly developments.

Born in 1946 in the small town of Rimbey, Alberta (Canada), Eileen and her family moved to Edmonton while she was still very young. Following her high school studies, she travelled to Chatham, Ontario, to explore a possible vocation with the Ursuline Sisters there, entering their novitiate in 1964. Three years later, Sister Eileen returned to Edmonton to pursue an Honours Bachelor of Arts degree in Classics, which was followed by a Masters degree in Near Eastern Studies from the University of Toronto. From 1973 to 1977, she served on the faculty of Newman Theological College in Edmonton, before beginning her doctoral studies at Harvard University’s Department of Near Eastern Languages and Civilizations. Her PhD work involved the study and publication of two non-biblical psalms found among the famous Dead Sea Scrolls, and was conducted under the direction of Dr. John Strugnell, a pre-eminent Scrolls scholar. From 1982 to 1989, she taught at the Atlantic School of Theology in Halifax, Nova Scotia and, in 1990, became a professor in the Department of Religious Studies at McMaster University in Hamilton, Ontario, where she continues to teach today.

Much of Dr. Schuller’s scholarly career has centred around the Dead Sea Scrolls—working to ensure their careful study, analysis and publication, and helping people to understand both their content and their importance in the larger field of modern biblical study. She is one of the team of editors who helped to complete the publication of the Scrolls in the 1990s, and she regularly writes and lectures on them around the world, both for her academic colleagues and for non-specialist audiences. Much of her work has focussed on non-canonical psalms, on the Hodayot (hymns of praise) from the Scrolls, and on women in the Bible.

The fact that Dr. Schuller’s work focuses on what is known as “Second Temple” Judaism (the period roughly between about 515 BC and AD 70) means that it has particular significance for the development of Judaism and, toward the end of this period, coincides with the life of Jesus and the first few decades of the Christian movement. Her research and publications help us to understand some of the theological diversity that existed in Judaism in those decades before the destruction of the Jerusalem Temple by the Romans in AD 70, and explore some of the richness of Jewish life at that period, while Christianity was still largely one of several “sects” within the broader Jewish community, long before the “parting of the ways” that would eventually lead to the separation of the two faiths, and nearly 2000 years of tensions, hostility and misunderstanding between Jews and Christians. Her work, and that of her colleagues, offers us unique and invaluable insights into that formative period, for which we have relatively few other sources to draw on.

Sister Eileen’s relationship to Judaism, however, goes far beyond its ancient forms, and far beyond the classroom. She has worked and studied extensively in Israel, and she travels regularlty to Jerusalem for academic conferences and ongoing research, and to meet with her wide circle of friends and colleagues there. Since 2001, she has served on the Canadian Christian-Jewish Consultation (CCJC, Canada’s national Jewish-Christian dialogue body,) as a representative of Canada’s Catholic bishops; her participation in that Consultation has brought her into contact with a cross-section of Jewish community leaders, and she is highly respected both for the insights she offers as a world-class scholar, and for the gentle, respectful way in which she engages with issues that are frequently controversial and emotionally charged. As part of the fiftieth anniversary celebrations for Nostra Aetate, Dr. Schuller has been invited to speak at several public events about the progress of Jewish-Christian dialogue, and she was one of the organizers of a colloquium at her university that brought Jewish and Christian religious leaders together to reflect on that history, and to look ahead to the future of that relationship.

Dr. Schuller has been an editor of, or contributor to, a large number of publications in the field of Biblical studies, including the HarperCollins Study Bible and the New Interpreter’s Dictionary of the Bible, and she is the associate editor for the soon-to-be-published Paulist Biblical Commentary. She worked closely with the Canadian bishops on the preparation of the Canadian lectionary for Mass, and has been a consultant and translator for the International Commission on English in the Liturgy (ICEL). In September of 2014, Dr. Schuller was elected to the Royal Society of Canada, in recognition of the calibre of her scholarship and, in November of that year, Pope Francis conferred on her the Pro Ecclesia et Pontefice (“For the Church and the Pope”) medal, for her distinguished leadership in the Catholic community. As a scholar and educator, Eileen Schuller brings passion and wisdom, careful judgement, deep faith, and a generous openness to others, modelling some of the best of the “culture of dialogue” that Nostra Aetate encouraged, and that the Catholic Church today is committed to living out.