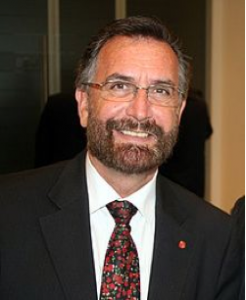 If you look at photos from the Assisi Day of Prayer called by Pope Benedict XVI in October 2011, you’ll notice Ecumenical Patriarch Bartholomew (representing the Eastern Orthodox churches) on the Pope’s right, and a bearded man in a kippah and glasses on the Pope’s left. That man, Rabbi David Rosen, is one of today’s most distinguished figures in Jewish-Christian relations—an Orthodox rabbi who has been at the very heart of interreligious dialogue as it has developed around the world over the past several decades.

Born in 1951 in Newbury (England), David Rosen was educated in England and Israel, beginning his studies in a Jerusalem yeshiva before enlisting with the Israel Defense Forces in 1970. He later received rabbinic ordination from the ultra-Orthodox Yeshivat Ponivez, and returned to the IDF as chaplain to its troops in the Sinai Peninsula from 1972 to 1973. After his marriage to his wife Sharon and the completion of his military service, the newlywed couple moved to South Africa, where David became the rabbi to a 10,000-person congregation (the country’s largest) in Cape Town, serving there from 1973 to 1979.

During those years, he founded and chaired the Cape Inter-Faith Forum, which brought together Jews, Christians and Muslims, and he was known for taking courageous political stands at a very delicate time in apartheid-era South Africa. He stated that “religious leaders, particularly Jewish religious leaders, who separate politics from their religion fail in their duty,” and said that “the only way to remain in this society as a Jew is to stand up for principle, and stand against injustice and iniquity”. Views such as these made him the target of public criticism, numerous death threats, and surveillance by the South African government, and that government refused to renew his work visa in 1979. His work as an interfaith leader in the struggle against apartheid would prove to be an important foundation for the broader interreligious and peace work that would constitute such a large part of his career.

Rabbi Rosen (still only in his late 20s) was on his way to take up a new position in New York when he learned that the relatively small (but very distinguished) Jewish community in Ireland was in need of a new Chief Rabbi. A visit to the Emerald Isle convinced him, and Rosen served as its Chief Rabbi until 1985, helping to establish the Irish Council of Christians and Jews, and a new programme in Jewish-Christian studies at Dublin’s Irish School of Ecumenics. He was widely loved and respected during his years in Ireland for his warmth, openness, and community involvement. In 1985, he returned to Israel with his family, to take up new roles in several Jewish educational institutions, and to spearhead interfaith and Vatican relations for the Anti-Defamation League. He served as a member of the Bilateral Commission of the State of Israel and the Holy See which negotiated the historic establishment of diplomatic relations between the two states in 1993.

A past President (and now honourary President) of the International Council of Christians and Jews, he is also an International President of Religions for Peace, a member of the executive of the World Council of Religious Leaders, and part of the Board of the King Abdullah bin Abdulaziz International Centre for Interreligious and Intercultural Dialogue (KAICIID, based in Vienna). Rabbi Rosen’s leadership has been recognized by knighthoods from Queen Elizabeth II and the Vatican, and by several other awards and honourary doctorates. He travels widely to foster better relations between Judaism and other world religions, and to provide advice in the field of interreligious dialogue, and regularly speaks and writes on contemporary interfaith topics.

David and Sharon Rosen live in Jerusalem, and they have three daughters, two granddaughters and three grandsons.

Rabbi Rosen speaking to the General Assembly of the United Nations (February 2012): https://youtu.be/8Stx5Oe9wAU