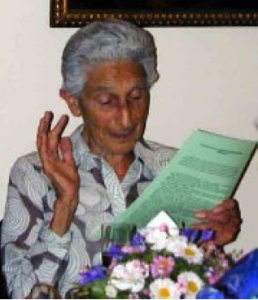 If there were an award given for the longest life lived in the field of Jewish-Christian relations, it seems quite likely that the prize would go to Dr. Lea Sestieri. Dr. Sestieri, one of Italy’s most respected and prolific scholars in the modern Jewish-Christian dialogue, turns 102 this year and, until very recently, was still very involved in the community, offering her reflections rooted in a long, rich life which has witnessed the birth—and the flowering—of that interreligious friendship, in Italy and elsewhere.

A native of the Eternal City (Rome), Lea Sestieri was born on May 31, 1913, one of five children born to Sabatino Settimio and Margherita Toscano; one of her paternal uncles donated the building where the Italian Jewish Centre is today located. In 1931, she enrolled in the Arts and Philosophy faculty of Rome’s “La Sapienza” university, specializing in Semitic languages. One of her professors there, the noted Biblical scholar Umberto Cassuto, was impressed by her passion and her intelligence, and recommended that she pursue studies at the Italian rabbinical college, as an auditor—thus becoming the first woman to study there (she also served as the rabbinical college’s librarian). Later in her life, Lea would say that much of her passion for dialogue came from seeds sown during her years at the rabbinic college. A year after her graduation in 1935, Lea married Umberto Scazzocchio, who was serving at the time as the secretary to the Roman Jewish community.

Shortly afterward, the newly-married couple moved to Eritrea (in Ethiopia), where Umberto worked as a lawyer and Lea taught in the local Italian College, as well as supervising the conservation of rare Ethiopic manuscripts in the national library. The year 1938 saw the birth of their son Claudio, but also the implementation of a series of racial laws which led to Lea’s dismissal, and meant that Umberto was forced to work in secret, for “Aryan” colleagues. Lea’s brother Giuseppe had already emigrated to Uruguay, and was able to obtain a visa for the family, and so they fled westward, travelling through France and Spain, and into Portugal, where they finally managed to set sail for South America. Father Giuseppe Ricciotti, one of Lea’s professors at La Sapienza, had written a letter of recommendation for her, and she was named to the Chair of Greek Literature at the University of Montevideo (Uruguay). During this period, she devoted her energy to a wide range of teaching and writing about Biblical and religious topics in various South American institutions.

While in Uruguay, Lea founded and edited a magazine for the Sephardic Jewish community, called Amanacer [The Dawn], hosted a popular radio programme about Italian news and culture, and was actively involved in leading the expatriate effort to fight Mussolini’s Fascism back in Italy. She then began a diplomatic career which would eventually take her to Argentina, Brazil and Switzerland. In each of those countries, she was actively involved in Jewish-Christian dialogue, offering lectures and teaching courses whenever possible. Between 1968 and 1970, Dr. Sestieri taught Greek language and literature at the Beersheva campus of the Hebrew University of Jerusalem, as well as courses in Italian at the University of Tel Aviv, before moving with her husband to Locarno (Switzerland) for ten years.

In 1979, she returned to her homeland of Italy, where she was invited to serve as a professor of post-Biblical Judaism at the Pontifical Lateran University in Rome. She became editor of a series of books in Jewish thought and Jewish-Christian relations (called “Radici”,” Italian for “Roots”), was one of the founders of Rome’s Amicizia ebraico-cristiana (Jewish-Christian Friendship Association), offered lectures at Rome’s SIDIC Centre (=International Jewish-Christian Documentation Service), and took part in the important series of Jewish-Christian dialogues sponsored by Italy’s Camaldolese religious order. She has published numerous scholarly books and articles (see below for a selected bibliography), including a number of articles in the Quaderni (“Notebooks”) of Turin’s Jewish-Christian Friendship Association.

To mark Dr. Sestieri’s ninetieth birthday in 2003, the Jewish community of Rome organized an academic study day in her honour and, for her centenary in 2013, she was honoured and praised by leaders of Rome’s Jewish and Christian communities. Speaking of Pope John Paul II’s pilgrimage to Israel in the year 2000, Dr Sestieri wrote: “My own point of view comes from dedicating much of my time—for nearly fifty years—to reconciliation between Jews and Christians, trying to help non-Jews understand who we are, and what the Judaism is that we live and practise … As someone involved in that work, I sense that the footprints left by the Pope’s trembling steps in Israel cannot now be erased, and are bound to became an intrinsic part of the Church’s reconciliation with the [Jewish] people who provided its roots—roots without which it could never have been born”. And, as she said in a speech on her ninetieth birthday: “The most important thing of all is action”. Well into her second century now, Dr. Lea Sestieri continues to inspire another generation of young scholars and interfaith leaders with her writings, her advice and her example.

Some of Dr. Sestieri’s books (all in Italian):

], and a collection of major Christian documents about Judaism, in Italian translation: The Christian Churches and Judaism: 1947-1982 [Le chiese cristiane e l’ebraismo : 1947-1982,