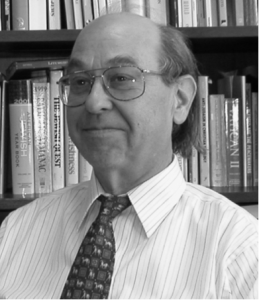 For the better part of the last 40 years, Dr. Eugene Fisher has been one of the most consistent, visible and articulate presences in Jewish-Christian dialogue in the English-speaking world. Especially in the specific realm of Jewish-Catholic relations, it is rare to see an initiative, conference or publication in the field, in the United States or internationally, in which he has not been involved as a central figure. His leadership and scholarly work has been repeatedly recognized by his peers, and he is today one of the“éminences grises” of the Jewish-Christian relationship, continuing a long and distinguished career that has had a major impact on this growing (but still young) field.

Eugene J. Fisher was born in Grosse Pointe, Michigan on September 10, 1943. He was a student at Detroit’s archdiocesan seminary (Sacred Heart) during Vatican II, graduating with a B.A. in 1965. Three years later, he completed a Masters degree in Catholic theology at the University of Detroit and then, in 1968, moved to New York to pursue an M.A. in Jewish Studies from New York University (conferred in 1971), and a Ph.D. (also from New York University, conferred in 1976), in the field of Hebrew culture and education. As he later recalled, when be began his New York studies, “I had stepped into a career in a field that did not even exist before the Second Vatican Council: Catholic-Jewish relations”. Fisher’s doctoral dissertation examined the presentation of Jews and Judaism in post-Vatican II Catholic religion textbooks—roughly 15 years after the pioneering study of that question done by Sister Rose Thering, OP. In 1977, he succeeded Father Edward Flannery, becoming the first lay Associate Director of the Secretariat for Ecumenical and Interreligious Affairs of the U.S. Conference of Catholic Bishops, tasked with the specific mandate of Jewish-Catholic relations. It was a position that he held for thirty years, until a restructuring of the Secretariat in 2007.

Throughout those three decades, he travelled and lectured widely on a range of contemporary issues in the Jewish-Catholic relationship, including the ongoing challenge of anti-Semitism; portrayals of Jews in theatre and film; Biblical interpretation; liturgical aspects, and catechetical implications. He has published some twenty-five books and monographs, and over 300 articles in major religious journals, many of which have been translated into French, Spanish, Italian, Portuguese, Polish and German. In 1983, he offered concrete suggestions for formation of future Catholic clergy in Jewish-Christian matters (Seminary Education and Christian-Jewish Relations: A Curriculum and Resource Handbook).

Fisher was the principal contributor to several ground-breaking documents of the American bishops, including their 1988 statements “God’s Mercy Endures Forever: Guidelines on the Presentation of Jews and Judaism in Catholic Preaching” and “Criteria for the Evaluation of Dramatizations of the Passion”. Together with the late Rabbi Leon Klenicki, Dr. Fisher edited the definitive collection of Pope St. John Paul II’s teachings on Catholic-Jewish relations; it was initially published in 1987, expanded in 1995, and attained its final form (after the Pope’s death in 2005) as The Saint for Shalom: How Pope John Paul II Transformed Catholic-Jewish Relations: The Complete Texts 1979-2005.

In 1981, Pope John Paul II named Dr. Fisher as a consultor to the Vatican Commission for Religious Relations with the Jews and, in 1985, he was nominated to the International Vatican-Jewish Liaison Committee, to represent the Holy See. He was twice nominated for the Nobel Prize by some of his Jewish colleagues. Since his retirement from the USCCB, Eugene Fisher has served as Distinguished Professor of Theology at Saint Leo University in Florida, and he continues to write and speak regularly, pursuing a lifetime of passionate commitment to Jewish-Christian dialogue, and to implementing the vision of Nostra Aetate and the Church documents that have built upon it since 1965. Dr. Fisher is married to Cathie, and they have a daughter, Sarah.

The citation for the 2007 Cardinal Bernardin Award, granted to Dr. Fisher by the Catholic Common Ground Initiative: http://www.catholiccommonground.org/2007-bernardin-award