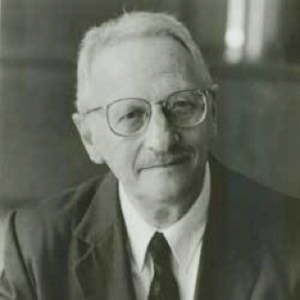 Rabbi León Klenicki, one of the most passionate and prolific modern Jewish voices in interreligious dialogue, was born on September 7, 1930 in Buenos Aires, Argentina, to parents who had emigrated from Poland in the previous decade. In 1959, Léon received a scholarship to study in the United States, at Cincinnati’s Hebrew Union College. After initial studies in philosophy, he graduated with a Masters degree and received his rabbinic ordination in 1967 from Hebrew Union College, having intensively studied the field of interfaith dialogue. Returning to his native Argentina, he became the rabbi of Congregation Emanu-El in Buenos Aires, and director of the Latin American arm of the World Union for Progressive Judaism. It was in that second capacity that, in 1968, Klenicki took part in the first-ever formal gathering of Latin American Christian and Jewish leaders, held in Bogotá, Colombia, addressing the participants on the shared Scriptural bonds linking Jews and Christians, but also recalling the long Christian history of persecuting Jews; the Middle Ages, he said, were a time when “cathedrals were raised to the sky while Jews had to go underground”. And yet, with a nod to recent changes in Church teaching, he acknowledged: “The time of hope has arrived. The task is hard, but not impossible.” He would lecture widely in Latin American centres, inaugurated a study of attitudes toward Jews in Latin American religious textbooks, and began a magazine called Teshuvah(Hebrew for “repentance”), to explore Jewish thought. Throughout his life, he remained a leading figure in the Reform movement of Judaism, especially in Spanish-speaking countries, editing and publishing numerous liturgical and educational texts aimed at meeting the needs of local communities.

In 1973, Klenicki moved to New York, to become the director of Jewish-Catholic relations for the Anti-Defamation League (ADL) and, eleven years later, became its director of interfaith relations, a position he would hold until 2001. In those capacities, he was known for his ability to speak passionately and forcefully about important issues—but always in a respectful way that challenged but also invited further dialogue. In 1987, he did not hesitate to reproach the Vatican when Pope John Paul II agreed to meet with Austrian President (and former UN Secretary-General) Kurt Waldheim, even after Waldheim’s service in a Nazi military unit had become a matter of public record. When, in 1997, the Vatican issued We Remember, its long-awaited statement on the Holocaust [Shoah], Klenicki praised many aspects of it but criticized others, saying that the Church had missed a unique opportunity to forthrightly confront some of the painful issues raised by the wartime behaviour of European Catholics and their leaders. In any case, he said, “Now the deniers of the Holocaust in Europe have to deal with the Vatican”.

Klenicki’s publications in the field are extensive and wide-ranging, including discussions of problematic Biblical passages; conversations with Christian clergy and scholars about theology, faith and prayer; evaluations of the Christian tradition of Passion plays; liturgical resources for joint Jewish-Christian celebrations of Passover and commemorations of the Holocaust; and recollections of Jewish communities in Latin America. For many years, he worked very closely with Dr. Eugene Fisher, the Associate Director of the U.S. Bishops’ Secretariat for Ecumenical and Interreligious Affairs, and the two men collaborated on a number of books, statements and guidelines.

In a 1989 book that he co-authored with Father Richard John Neuhaus (Believing Today: Jew & Christian in Conversation), Klenicki wrote that “dialogue is not something that is in addition to being Jewish and Christian; it is an integral part of being Jewish and Christian today. The dialogue is not a hobbyhorse for ‘people who happen to be interested in that sort of thing’. We are called to this enterprise by God, and it is his enterprise before it is ours. The dialogue is most fully served by our becoming more fully Christian and more fully Jewish. It is served by our disagreements as well as by our agreements. In sum, we think that the late Abraham Joshua Heschel put it well when he said, ‘Interfaith dialogue begins with faith.’ ” (italics added).

In May of 2001, the Vatican’s Commission for Religious Relations with Jews honoured Rabbi Klenicki for his many decades of leadership in interfaith dialogue and in 2007, he was inducted by Pope Benedict XVI into the papal Order of St. Gregory the Great. In January 2009, Rabbi León Klenicki died of cancer at the age of 78, leaving his wife, Myra Cohen Klenicki, and two children. In 2013, a number of his scholarly colleagues and friends published a volume of essays as a tribute to him, focussing on the areas of liturgy, spirituality, Biblical interpretation, and theology, and his writings continue to be widely used in many educational and pastoral settings.

A memorial biography of Rabbi Klenicki on the Web site of the Woolf Institute (Cambridge University); online at: http://www.woolf.cam.ac.uk/uploads/rabbileonklicki%20edit.pdf