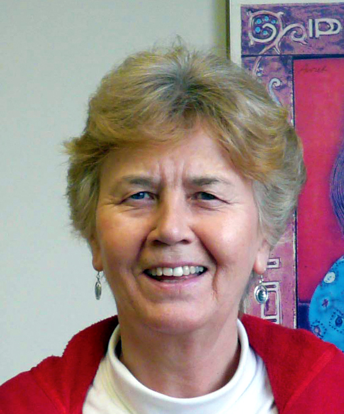 Sister Lucy was born and raised in the city of Saskatoon, and it was there that she first encountered the Sisters of Our Lady of Sion (Notre-Dame de Sion), a religious congregation of Catholic women established in the nineteenth century in France and originally devoted to educating young women, which had founded a girls’ school, Sion Academy, in Saskatoon.

More than 8000 kilometres separate the city of Rome from the city of Saskatoon, Saskatchewan, and from Saskatoon to Rome is more than 10,000 kilometres. Cities which are very far apart geographically, but which are intimately united in the rich life and interfaith ministry of Sister Lucy Thorson.

Sister Lucy was born and raised in the city of Saskatoon, and it was there that she first encountered the Sisters of Our Lady of Sion (Notre-Dame de Sion), a religious congregation of Catholic women established in the nineteenth century in France and originally devoted to educating young women, which had founded a girls’ school, Sion Academy, in Saskatoon. In the 1950s and 1960s, the Sisters’ focus began to shift significantly, to emphasize the unique relationship that links Jews and Christians, and to promote greater dialogue and understanding between those two faith-traditions. Sister Lucy’s own training was in the area of theology, receiving her Masters of Arts degree in Theology and Jewish Studies, jointly granted by the Hebrew University in Jerusalem and the University of St. Michael’s College in Toronto. Her 1993 thesis examined the communal dimension of repentance in both Jewish and Christian liturgies (see below).

From 1973 to 1990, this Saskatoon native made Jerusalem her home, serving for eight years (from 1983 to 1991) as the regional Superior for the Sisters of Sion’s Mediterranean province, and working closely with her Sisters throughout the Middle East (including Egypt, Tunisia, Israel, Turkey and Lebanon). During her 17 years based in Israel, she was actively involved with a broad network of Jewish and Christian organizations and groups in the Holy Land and, from 1985 to 1988, she served as the first woman president of the Ecumenical Theological Research Fraternity, a Jerusalem-based centre for scholarly research and discussion.

In 1993, having completed her M.A. studies, Lucy was asked to move to Rome, where she became the directress of the renowned SIDIC Centre (SIDIC is a French acronym for “International Jewish-Christian Documentation Service”), which had been founded in the wake of the Second Vatican Council’s call for Catholics to change their theological thinking about Jews and Judaism. The Centre collected and organized key materials from around the world that demonstrated the gradual unfolding of a new type of Jewish-Christian relationship; it organized lectures and conferences by Jewish leaders and scholars, offered guided tours of Rome’s former Jewish Ghetto, and provided a specialized library for the study of Judaism. SIDIC also published an international journal which chronicled the development of the dialogue, and provided catechetical materials and scholarly reflections. During her time leading SIDIC, she co-edited (together with Emilio Boccarini) a volume of conference presentations called Good and Evil After Auschwitz: Ethical Implications for Today (published in Italian by Edizioni Paoline in 1998), based upon a colloquium on that topic, held in Rome in September of 1997.

When the SIDIC Centre changed its location and structure in the early 2000s, Sister Lucy joined the staff of the newly-established Cardinal Bea Institute for Judaic Studies (part of the Pontifical Gregorian University, and named for the distinguished German Jesuit cardinal Augustin Bea, who had been largely responsible for Vatican II’s declaration Nostra Aetate, on non-Christian religions). From 2004 to 2007, she was a key part of the Bea Institute’s work, teaching courses in Jewish liturgy and helping to organize major events, including the 40th anniversary of Nostra Aetate, which the Bea Institute celebrated with a major conference in 2005. In 2003, Pope John Paul II named her as a consultor to the Vatican’s Commission for Religious Relations with the Jews, and in that role, she worked closely with many international leaders in the field of Jewish-Christian dialogue and education. She contributed several articles to the ground-breaking Dictionary of Jewish-Christian Relations, published by Cambridge University Press in 2005.

More recently, Sister Lucy has returned to her native Canada, where she joined the team of Scarboro Missions’ Interfaith Department in Toronto. She has been a resource person to the Multi-Faith Centre at the University of Toronto, has organized numerous lectures and special events at Scarboro, and was one of the key planners of the October 2015 “Responsibility to Engage” conference, which marked fifty years since the publication of Nostra Aetate. Together with Murray Watson, she has developed a number of new educational resources, including “Milestones in Modern Catholic-Jewish Relations,” and brief biographies of dialogue pioneers and contemporary voices (available as free downloads from the Scarboro Missions Web site, under “Interfaith Dialogue || Jewish-Christian Relations”). She is on the executive of the Christian-Jewish Dialogue of Toronto (CJDT), and is a Catholic delegate to the Canadian Christian-Jewish Consultation (CCJC). Having personally experienced the fruits of much of that development, Sister Lucy is optimistic about what the future holds, despite the inevitable “bumps” on the road, and she emphasizes the need for fifty years of exciting Jewish-Christian progress to “trickle down” to the grassroots level, to influence the thinking of “ordinary” Christians about their Jewish sisters and brothers. The rich tapestry of her life enables her to speak passionately, knowledgeably and wisely about the hopes and challenges of that unique relationship, and she is a wonderful mentor and guide to future generations, pointing the way forward with great faith and hope.

Evan Boudreau, “Still work to do in Jewish relations,” The Catholic Register (Feb. 11, 2014); online at: http://www.catholicregister.org/item/17625-still-work-to-do-in-jewish-relations