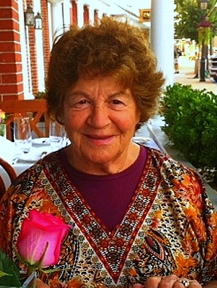 Today, there is only a small handful of people who can say that they had a firsthand involvement in the process that led to the publication of Vatican II’s declaration Nostra Aetate in 1965. Judith Banki is one of those rare individuals—someone who has had a front-row seat for the unfolding of modern Jewish-Catholic dialogue, during Vatican II itself, and as one of its leading voices in the five decades since.

Born in Brooklyn, New York in 1928, into a family that she describes as “middle class, politically liberal, Jewish and secular,” Banki studied liberal arts at the University of Wisconsin. “After graduation, I went to the new State of Israel in early 1949 for a two-week visit, stayed over nine months, and almost didn’t come back to the States … I was hooked! Israel made a Jew out of me, in terms of historical awareness, sensitivity and commitment … It awakened in me a strong sense of identity with the Jewish people—historically and culturally—and a decision to somehow ally myself with the fate and faith of that people. I started learning the language, history and religion of my people, and have been learning ever since.”

In 1955, Banki was interviewed for a position in the Anti-Defamation League’s newly-established Department of Inter¬rel¬igious Cooperation. “When she inquired about the nature of the job, Rabbi [Arthur] Gilbert explained that it focused on building bridges of understanding to confront stereotypes and prejudices. Banki replied that though the job sounded wonderful, it was not for her. He pressed her, ‘Why not?’ ‘I have no experience in this field,’ she replied. Gilbert retorted, ‘My dear young lady, there is no field.’ ” (Encyclopedia of Women and Religion in North America, p. 1277). Late in 1959, she joined the staff of the American Jewish Committee’s department of interreligious affairs and when, in 1961, Rabbi Marc Tanenbaum became its director, the two of them began a close collaboration that would span more than 20 years. Rabbi Tanenbaum became the AJC’s designated point-person in matters related to Vatican II, and Banki was already working on an AJC memorandum that distilled down the conclusions of a recently-completed study of how Jews were depicted in Catholic religious textbooks (one of several memoranda sent by the AJC to Cardinal Augustin Bea in Rome). Cardinal Bea had been tasked by Pope John XXIII with preparing a draft document on the Jews for the Council’s consideration, and the study written by Banki provided tangible examples of the kinds of misunder¬standings and misrepresentations that so badly needed revision. Many historians today agree that the AJC’s memorandum was one of the important catalysts making a strong case that such a document was urgently needed. During the Council, Banki wrote summa¬ries of its deliberations that were published in the annualAmerican Jewish Year Book.

In the years after Vatican II, Banki worked very closely with Rabbi Tanenbaum (and, from 1968 onward, with his colleague and successor, Rabbi James Rudin), until Rabbi Tanenbaum’s untimely passing in 1992. In the wake of his death, his widow (Dr. Georgette Bennett), colleagues and friends established what would become the Tanenbaum Center for Inter¬religious Understanding in New York, to share his humanitarian and religious vision, and to continue his work; as the Center’s Web site states, “Tanenbaum’s vision is a safe world in which religious differences are respected and daily life reflects the highest values of our shared religious and ethical traditions”. Judy Banki has been a respected leader on the staff of the Tanenbaum Center since its establishment, and today serves as its Senior Advisor for Interreligious Affairs. She has been instrumental in collecting, editing and publishing many of Rabbi Tanenbaum’s speeches and writings which were left unpublished at this death, most particularly in the 2002 volume A Prophet for Our Time: An Anthology of the Writings of Rabbi Marc H. Tanenbaum (Fordham University Press), which she co-edited with Dr. Eugene Fisher.

In her role as an interfaith scholar and educator, Banki has written numerous articles on Jewish-Christian relations, anti-Semitism and prejudice, including the portrayal of Jews and Judaism in Christian catechetical materials, assessments of Vatican II’s impact in the decades following the Council, an analysis of the Oberammergau Passion Play, and responses to several major Vatican documents, including the 1985 Vatican “Notes on the Correct Way to Present Jews and Judaism” and the 1993 statement on the Shoah, We Remember. In 1992, she authored a memorial tribute to Rabbi Tanenbaum for the periodical SIDIC, published by the Sisters of Sion in Rome.

Judith Banki has been repeatedly honoured for her longstanding commitment to interfaith dialogue, including an honorary doc¬torate from Seton Hall University in 2001, the Interfaith Gold Medallion from the International Council of Christians and Jews [ICCJ], the Nostra Aetate Award from the National Catholic Center on Holocaust Education at Seton Hill University, and the 2009 Shevet Achim Award from the Council of Centers on Jewish-Christian Relations [CCJR]. In 1992, the National Workshop of Christian-Jewish Relations, in recognizing her contributions, said: “No one has done more to shape the nature and meaning of interreligious relations as we have developed them, perhaps uniquely, in this country than Judith Banki”. Today, although in her mid-80s, she continues to be a much-respected and much-loved figure in Jewish-Christian dialogue, a source of wisdom, and a tireless advocate of interfaith understanding, who shows no signs of slowing down any time soon.

A brief biography of Judith Banki on the Web site of the Tanenbaum Center: https://tanenbaum.org/programs/interreligious-affairs/about-judith-banki/